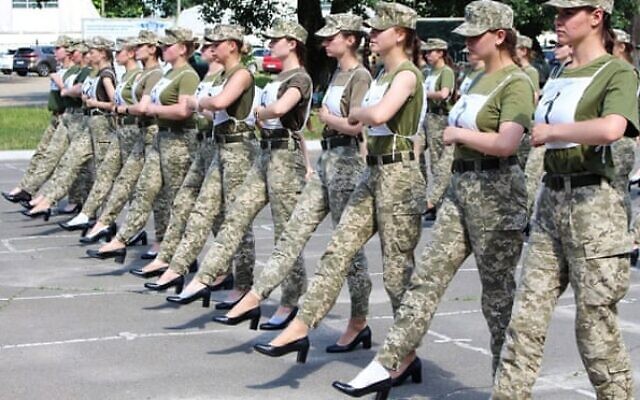 The Ukrainian government has reversed its earlier decision to allow cadet women in the military to march on the parade ground in heels. This is a result of the backlash it has received since the Ukrainian Ministry of Defence released pictures showing the women marching in heels. Especially noting that heels are quite uncomfortable footwear and it will be difficult for female cadets to march in them.

It all started sometime in the last week of June when photos of female cadets training and marching in high pumps with blocked heels surfaced online.  It was reported that the cadets were preparing ahead of the country’s independence celebration coming up next month on the 24th of August.

As expected, the photos made rounds on social media, and female Ukrainian legislators alongside others criticized the footwear, they accused the military of being sexist and having a “medieval” perspective of what women should look like and how they should dress.

A member of the opposition, Inna Sovsun expressed extreme dissatisfaction with the military’s new dress code, she said in a Facebook post “It is hard to imagine a more idiotic, harmful idea”. She also mentioned that by making women wear those uncomfortable heels, the military was promoting a stereotype that women had to look like dolls, neglecting the fact that the shoes could be harmful and inconvenient.

To reiterate their point, on Friday some female lawmakers placed a pair of high-heeled pumps in front of the Minister of defence, Andriy Taran and asked that he put on the pair at the country’s independence ceremony since they were so ‘comfortable’.

During a joint cabinet meeting, other members of the cabinet criticized the decision and made statements expressing their stance on the matter. However, the defence minister refused to comment at the time. On Friday, a statement was made on Facebook addressing that the inclusion of heels as parade shoes was not new. According to the defence minister, they were a part of uniform regulations that were made as far as 2017. The statement was also strategically accompanied by pictures of other countries’ female cadets who wore heels during events.

However, it appeared that the authorities finally gave in as Taran reportedly stated that high heels were indeed uncomfortable for a parade. A statement was also released to that effect.

The defence minister assured the cadets that “improved, ergonomic” footwear would be provided as soon as possible. He also reportedly instructed officials to look into whether “experimental” shoes — ankle boots — could be worn by the female cadets instead of the pumps with heels.

The Ukrainian female soldiers have played a crucial role especially in the country’s conflict with pro-Russian separatists in the East.

Ukrainian women now make up about 15% of the armed forces which is a huge improvement so far. In the statement made by the female legislators, they expressed that female soldiers “have proved their worth not in heels, but with machine guns.”

It has also been noted that although the number of women in the military has increased, the authorities have failed to provide proper equipment to help them carry out their duties efficiently.

In 2016, a report showed that female soldiers had to fight wearing men’s clothing and shoes which were usually uncomfortable for them. This goes to show that gender stereotypes in the military are still an active issue.

One of the activists who contributed to the 2016 report, Maria Berlinska applauded the outrage over the photos of female soldiers and termed it a “healthy reaction”. Maria added that while cadets marching in heels may seem delightful to commanders, the fact remained that female combat soldiers were dying on the war front, just like their male colleagues wearing combat boots.

Read Also: Bill Cosby Is Free, but His Victims Are Not

Esther Jacqueline
Esther Jacqueline Alabi is a writer, blogger and advocate. Her writing is majorly influenced by her passion for feminism and gender equality.
For leisure, Jacqueline writes on her blog thechiefdom.blogspot.com and watches romcoms.
Share
Facebook
Twitter
Pinterest
WhatsApp
Linkedin
Telegram
Previous articleBill Cosby Is Free, but His Victims Are Not
Next articleThe Pill Club Raises $41.9 Million In Funding