In 1665, Kongo Princess, Aqualtune Ezgondidu Mahamud Led 10,000 Men To Battle Before She Was Shipped To Brazil As A Slave 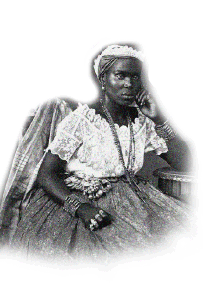 Princess Aqualtune Ezgondidu Mahamud da Silva Santos was a warrior who led 10,000 men into the Battle of Mbwila in 1665. This battle was between the Kingdom of Kongo and Portugal. Kongo at the time was the current day, Northern Angola, Republic of Congo, western part of the Democratic Republic of the Congo and Southern Gabon.

Kongo at the time was a vassal state of Portugal, and this war was meant to prevent the Portuguese from taking more control of Kongo than they already had.

About 5,000 men died in the war, while the survivors were captured and sold as slaves. Many of them crossed the sea into Brazil and other Portuguese controlled countries.

Among those captured were the King of Kongo, his two sons, two nephews, four governors, court officials, workers in the kingdom and hundreds of aristocrats.

Princess Mahamud was later enslaved at a sugar cane plantation alongside her brothers,  Ganga Zumba, his brother Ganga Zona, and their sister Sabina. Soon Sabina bore a son, Zumbi.

Together they formed their own kingdom of Quilombo dos Palmares, a home for slaves who had escaped. Their kingdom controlled the large areas of northeast Brazil during the Dutch-Portuguese War.

Zumbi succeeded his uncle and became the king of Palmares, and leader of the rebellion until he was killed in 1695 by the Bandeirantes, after which their kingdom was destroyed. Today, Zumbi is considered a national hero in Brazil.

Previous articleDid Meghan Markle Vote During The U.S Midterm Elections?
Next articleWhy The Marriage Of Princess Eugenie To Jack Brooksbank Was Called A Society Wedding And Not a Royal Wedding