The Story Of Betty Bigombe: The Ugandan Peace Builder Who Became Friends With A Warlord 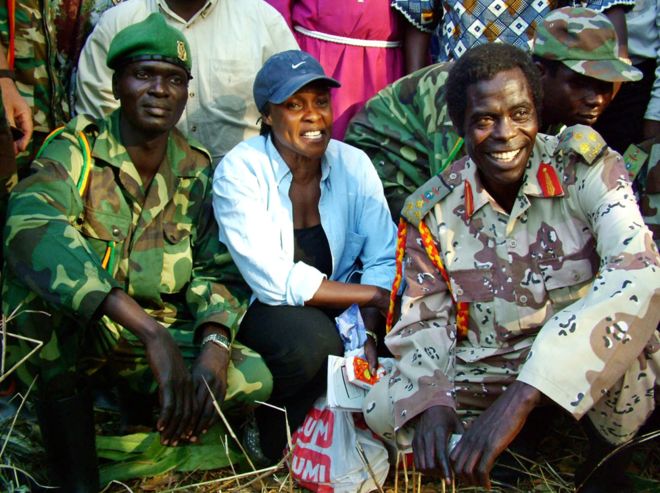 Betty Bigombe grew up in Northern Uganda in the late 1950s. At a time when very few women had the privilege of getting an education, she sought one. According to her, she knew this was the only way to make a difference in her community.

30 years later, this contribution to the society would become the necessity of fostering a friendship with the notorious leader of the Lord’s Resistance Army, Joseph Kony.

But how did it all begin?

Betty Bigombe, the 8th of 11 children, grew up in a polygamous society, and knew that she had to get an education. This doggedness saw her getting an offfer of a fellowship from Havard University.

Soon, she returned home, married with two children. It was the 1980s and Uganda was in the middle of a war between the then President Milton Obote’s forces and the guerrilla movement of Yoweri Museveni.

She supported Yoweri Museveni by hiding his supporters. At the time, she worked with a German ally who was with the UNHCR (the UN Refugee Agency). Together, they smuggled people whose lives were being threatened to Kenya.

Soon, Museveni became president in 1986 and rewarded Bigombe by making her a minister.

However, this was not a role in which she could perform optimally at because of the sexism at play at the time. She was relegated to reading papers as they (the other men) did not think she could do anything else.

But she wanted to work.

And so, Betty Bigombe came up with a plan. She volunteered to go and find out where rebels who were fighting in the northern part of the country, kept their weapons.

President Museveni agreed to let her go, but on the condition that she would negotiate with the factions to stop the fighting.

Her friends and family thought she was insane. And, everybody advised her to resign.

The man she was to negotiate with was Joseph Kony, the leader of the Lord’s Resistance Army known for its brutality.

Joseph Kony sent Bigombe a letter saying that he felt insulted that a woman was sent to negotiate with him. Her life was threatened but she was determined to stay and end the war. Then a second victim of Kony’s violence was sent to deliver a second letter.

His lips were chopped off, limbs cut off, and he was drenched in blood. She couldn’t even read the letter as it was very bloody.

Not discouraged, she wrote back to Kony. She referred to him as “my son” and used religion to connect with him. Eventually Kony agreed to a meeting.

She feared for her life and she thought that she would be captured and tortured. However, she wasn’t. They met deep in the jungle in a meeting so guarded, she was sure he definitely came ready to intimidate.

In the months that followed, there were several face-to-face meetings, and Kony started calling her “Mummy” Bigombe.

Joseph Kony agreed to come out of the jungle for peace talks with President Museveni.

But this victory was shortlived.

As soon as Bigombe told the president that it was time to establish the conditions for the peace talks, Museveni went on a public rally, threatening Kony with the wrath of the government troops.

Kony responded by killing 300 people in a trading centre on the border of Sudan.

Bigombe resigned and left for the US. According to her, it was a very painful defeat and she was devastated.

On getting to the US, she continued studies at Havard and soon got a job at the World Bank in Washington at the post-conflict unit.

However, one morning in 2004, she turned on the news and saw that Joseph Kony had again murdered 300 people in a camp.

Betty Bigombe returned to Uganda and tried on her own to arrange a fresh meeting with Kony. This time, she would not accept money from Ugandan government so that her impartiality would not be compromised. She spent the money she had saved for her daughter’s tuition to pay her satellite phone bill.

At this time Kony had been indicted by the International Criminal Court for war crimes and crimes against humanity.

Bigombe’s work was the foundation for peace talks in South Sudan in 2006. These talks however collapsed at the 11th hour, when Kony refused to sign a peace deal.

Joseph Kony has since then maintained a low profile and the remnants of the Lord’s Resistance Army have reportedly shrunk to less than 100.

Today Bigombe is working in a personal capacity to mediate in South Sudan’s crisis. She draws from her experiences in Uganda.