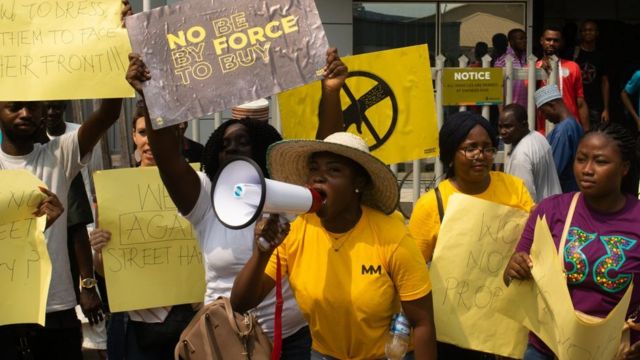 2019 has been the worst and best year to be a woman yet. Worst because we see on the news that more women (especially black women) are getting raped, kidnapped and even killed. Best because despite all these challenges, it seems to be the year that Nigerian women decided “Enough is enough. Fuck the patriarchy”. That’s right, patriarchy, the root cause of most evils against women and our common enemy that unites us as women. However, we can’t gosh over the boldness and glorious profanity of Nigerian women in combating patriarchy this year without recognizing one of the most important event that happened at the end of 2018; The Market March.

On the 15th of December, 2018, some women armed with custom yellow tee shirts and placards stormed the popular Yaba market to demand autonomy over their bodies. Yaba market traders are popular for grabbing, groping and slut shaming women who come to the market and on that day, Nigerian women held up placards and raised their voices to say one thing; “Stop touching us”. This conversation was sparked initially on twitter by Ozzy Etomi, manifested by the Market March and continued after the march as many women showed support for the movement. It was an exciting time to be a woman and to be part of the revolution but little did we know that 2019 had bigger things in store for us.

In February 2019, a twitter user “Khadija” used the hashtag #Arewametoo and described her experience as a northern woman with an abusive boyfriend who almost killed her. It blew up and many more women from the north began to share their experiences with rape, assault and other related issues. This was an exceptional development because the northern part of Nigeria is an extremely conservative one guided by tribal and religious values. For this reason, a lot of issues faced by women of the north are not discussed enough or even at all because of the conservative/silence culture. The Arewametoo hashtag shed light on what happens in the north from female genital mutilation to child marriage to marital rape and so on. The first step to solving a problem is to identify the problem and it is for this reason that the Arewametoo hashtag should not be discarded as just another viral tweet but rather as a tool that opened the can of worms everyone was afraid to open.

On the 7th of October, the internet received the biggest, eye opening documentary from the BBC titled “Sex for Grades: Undercover in West African Universities”. This documentary featured journalists who went undercover as either students or admission seekers at the University of Lagos and the University of Ghana. These journalists recorded video proof of some lecturers requesting for sexual favours from them in exchange for better grades or academic rewards. One of the women who played undercover and was also the lead journalist is Kiki Mordi, a 28 year old, who was unable to complete her education simply because she refused one of her lecturers sexual favors. Of course, this documentary broke the internet and many more women took to twitter to share their horrible experiences with lecturers in the university.

Many people argue that social media agitation and activism is merely a waste of time and I disagree. As proof to back up my disagreement, 48 hours after the release of the BBC documentary, the Nigerian Senate reintroduced the sexual harassment prohibition bill which proposed a jail term of 5 to 14 years for any lecturer caught soliciting for or having sexual relations with a student. Suffice it to say that the women of Nigeria are pleased but unsatisfied. Pleased that something is being done about the horrible situation but unsatisfied because there is still so much more to be done.

However, we shall take one step at a time and keep speaking our truth which by the way remains “Fuck the Patriarchy!”.

Read Also: Why Words Like Mompreneur and She-e-o Should Cease to Exist