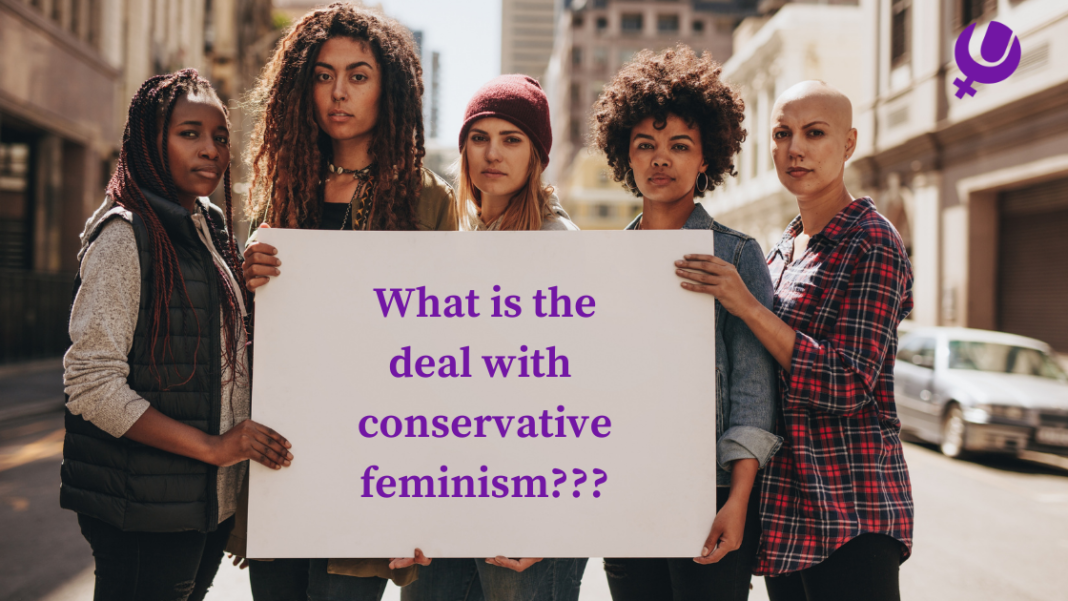 In 2020 when Judge Amy Coney Barrett was nominated to replace the late Justice Ruth Bader Ginsburg on the United States supreme court, the New York Times editorial wrote that her nomination represented a “new conservative feminism that is distinct, coherent, and influential” as it would reprioritize sex, romance, marriage and child-rearing, all of which had been lost due to the advancement of the feminist movement. This editorial was met with some backlash and started a conversation on “conservative feminism.”

They however hold conservative views on many issues including but not limited to abortion, queerness, sex education, divorce, etc. For example, Katherine Kersten, a writer who identifies as a conservative feminist, opposes gay marriage and refers to it as a perilous, slippery slope. She also called out the University of Minnesota and other institutions of higher learning for having a “liberal bias.”

On the one hand, there is a general understanding that feminism is not a monolith and that all feminists cannot all have the same view on every issue. There is also an understanding that it is impractical to gatekeep feminism as the word represents both an ideology and a sociopolitical movement.

However, on the other hand, there is a poignant display of bigotry under the guise of conservative feminism and this has prompted many liberal feminists to insist that conservative feminism cannot exist. “You cannot be Christian and feminist at the same time” is one statement that reflects this sentiment.

Conservatism is a cultural and socio-political philosophy that seeks to preserve and promote traditional social institutions, one of which is organized religion. Religion, especially Christianity, is perhaps the strongest tenet of conservativism. Many Nigerians are religious; hence many Nigerian feminists are conservative and this conversation is crucial for the Nigerian feminist space.

To put it simply, conservatism preserves and promotes bigotry, and bigotry is violence. Hence, conservative feminism preserves and promotes violence. This is not about the individual choices that conservative feminists make, it is not about that one feminist who is a Christian but is not homophobic. Rather, this is about the institutional power that conservativism wields and how dangerous it is for Christianity as an institution to “oppose” queerness, abortion, divorce, or any other social issue affecting real lives.

Whether or not conservative feminism is real or should be allowed to exist does not matter. What matters is that regardless of the label, these conservative beliefs are affecting real people.

Too many times, we have seen self-proclaimed feminists be openly homophobic or even misogynist under the guise of their conservative views. I may not have the power to draw the line between what is feminism and what isn’t, but I have the power to call out oppression when I see it, and I will, no matter what kind of feminist you call yourself.

Read Also: Feminism And Wickedness Are Not Mutually Exclusive