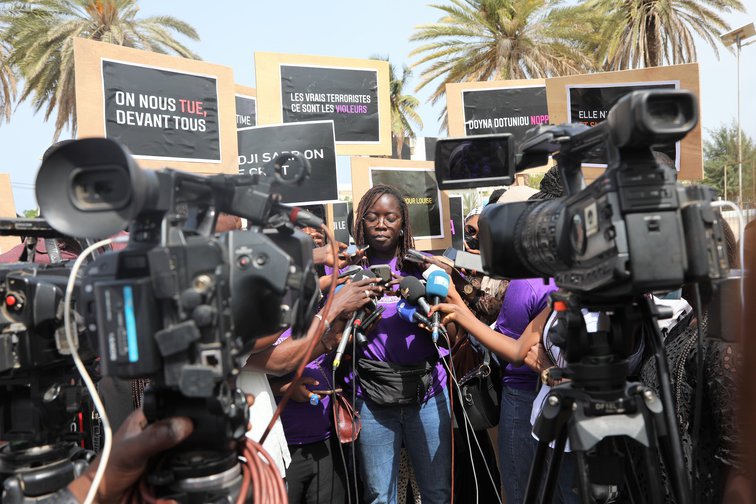 They were protesting the justice system in the country and the manner in which cases of rape and violence against women are treated.

According to Aissatou Sène, spokeswoman for the protest said in a speech, “We expect the state to provide structures, shelters, and everything needed to support victims. What we want from the state today is for women, who make up more than half the population, to feel safe.”

She continued saying, “We are here for all the “Louise”, we are especially here for a “Louise” who was raped, filmed and this pornographic film of a minor was shared and the author did not worry until we, the feminists, denounced it. The trigger is this violence that Senegalese women are subjected to. If justice and the law were applied and rapists received the sentences they deserved, we wouldn’t be here today.”

Sometime in January, the government passed a law that criminalized paedophilia and rape after several campaigns by different civil societies. The law provided a minimum of 10-years imprisonment and a maximum of life imprisonment for offenders. Before this legislation, rape was only considered a minor offence and offenders got away scot-free or with a little punishment.

However, after the massive protests in 2019 caused by the rape and murder of two women, the government sprung into action to adopt this new law.

This year, a popular opposition leader Ousmane Sonko was arrested over an alleged rape case and this caused a lot of uproars which led to five people’s deaths.

The allegations first surfaced in February, where a salon attendant where Sonko often visited for massages, accused him of raping her.

The accuser, Adji Sarr, was courageous enough to speak her truth and granted interviews to share her story. In one of her interviews, she urged that  “If Ousmane Sonko has never slept with me, let him swear on the Koran”. She also claimed that the accused had forced her to have sex with him on several occasions and threatened her if she refused to comply.

46-year-old Ousmane Sonko, who claims to be a strong devout Muslim has denied all the allegations and was detained by the police and charged with public disorder, following the unrest caused by his supporters after his detention.

Previous articleThe Pill Club Raises $41.9 Million In Funding
Next articleWhy Being a Nagging Wife May Save Your Husband’s Life