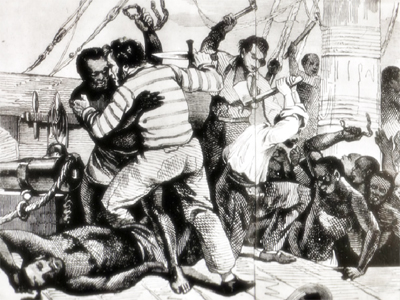 Not a lot of people know the gravity of slavery in Africa. Many even think that Africans went of their own accord across the sea before they were made to work in plantations. However, that is not the case, as Africans were sold by their fellow Africans, and some were captured during wars before being sold into slavery.

There is also the phenomenon of the “Triangular Trade”. Goods like iron bars, rum and trinkets, were brought from Europe to Africa for sale. However, the medium of exchange was purchased or kidnapped slaves. These slaves were returned to Europe to complete the triangular trade through the middle passage.

The middle passage was the stage of shipping the slaves to Europe and parts of America via the Atlantic. This middle passage was a voyage undertaken by large companies and groups of investors whose returns were usually in millions.

Enslaved Africans were mostly from Senegambia, Upper Guinea, Windward Coast, Gold Coast, Bight of Benin, West Central Africa and Southeastern Africa. They were shipped to Portugal, England, Spain, France, the Americas, and Caribbean etc. These voyages lasted up to 6 months.

The middle passage was not without mortalities, as an estimated 15% of Africans captured died at sea. The captured slaves were considered less than human and so, they were treated in horrifying manners. On one of such voyages across the Atlantic, the Zong Voyage recorded one of the voyages with the most recorded deaths.

The Zong was a British slaver, who took many slaves on the ship in 1781. The slaves were overcrowded and so became malnourished. Soon, disease struck and several crew members and slaves numbering up to 60 died.

Drinking water soon became a problem and many slaves were drowned to conserve water and allow the owners collect insurance for lost cargo. About 130 slaves were killed; this was aside the number that decided to kill themselves willingly, in defiance to the slave masters.

Slave revolts occurred at sea, and quite a number were successful. However, some were unsuccessful. Among the unsuccessful, was on particular incident in which the slave master killed the leader of the revolt and forced the two subordinates to eat his heart.

We know about these slave revolts from accounts of the captains of the ship or even crew members who survived.

Some of the slave revolts include:

1730 – In June, Captain George Scott had sailed from the Guinea coast with 96 slaves aboard the ship, LITTLE GEORGE. Six days into the journey, the slaves revolted and imprisoned the captain and some of the crew. After which, they steered the ship back to the coast of Africa and escaped.

1731 – In January, it was reported by an English newspaper that Captain Jump and all his crew members except 3, had been killed by slaves in an uprising, off the coast of Africa.

1735 – On the 17th of June, African s on Gambia River in West Africa, attacked a ship led by Captain Moore. One crew member was killed but the Africans were driven off. The attack was not successful.

1742 – In March, the slave masters aboard JOLLY BACHELOR were loading slaves into the ship in Sierra Leone when Africans attacked. The captain, Captain Cutler and two of his crew were killed. The captives were liberated and the ship was abandoned.

1753 – In December, Captain Bear was loading slaves into the ship at Coast Castle, West Africa. The slaves rebelled and killed the captain and all the crew except two who escaped to tell the story.

1764 – A ship, ADVENTURE, was attacked on the coast of Africa. The crew was killed and the captives were liberated.

1764 – HOPE, a ship was attacked by the slaves aboard it. Two crew members and 8 slaves were killed.

1765 – All the crew aboard the ship RI from Bristol, were killed in a slave revolt off the African coast. The only survivor was Mr. Dunfield who had been out in a small boat at the time of the uprising. He told the story.

1776 – On the ship, THOMAS, carrying 160 slaves, there was an uprising. The crewmen who were armed were able to quickly protect themselves behind a barricade. When the slaves saw that they weren’t going to win this revolt, about 30 of them jumped overboard to their deaths.

1789 – In April, there was an uprising aboard THE FELICITY. Captain William Fairchild was killed and three slaves were killed also before the uprising was contained.

1839 – In July, aboard the AMISTAD, the slaves who spoke Mende, revolted and won. However, they piloted the ship to Long Island, New York. There, a trial was held for them, to determine what their fate should be since external slave trade had been brought to an end in 1808. Former President John Quincy Adams defended them, and the Supreme Court ruled that they should be set free and allowed to return to Africa.

1841 – In October, a ship called Creole sailed towards New Orleans, with 135 slaves on board. When the ship was almost at Bahamas, the slaves revolted. They seized all the firearms and threatened to throw all the crew overboard if they weren’t taken to an English colony. Apparently, England had emancipated its slaves in 1833.

The ship docked at Nassau, and the slaves escaped. The US government lodged a complaint to Britain asking that the slaves be returned. Their complaint was ignored.