Oprah Winfrey was born Orpah Gail Winfrey on January 29, 1954 in Kosciusko, Mississippi, U.S to an unmarried teenage mother. Her mother, Vernita Lee, was a housemaid. Winfrey’s biological father is usually noted as Vernon Winfrey, a coal miner turned barber turned city councilman who had been in the Armed Forces when she was born. However, Mississippi farmer and World War II veteran Noah Robinson Sr. has claimed to be her biological father. Oprah had a relatively rough beginning as she was born into poverty in rural Mississippi to a teenage single mother and later raised in an inner-city Milwaukee neighborhood.

After Winfrey’s birth, her mother traveled north and Winfrey spent her first six years living in rural poverty with her maternal grandmother, Hattie Mae (Presley) Lee , who was so poor that Winfrey often wore dresses made of potato sacks, for which the local children made fun of her. Her grandmother taught her to read before the age of three and took her to the local church, where she was nicknamed “The Preacher” for her ability to recite Bible verses. When Winfrey was a child, her grandmother would hit her with a stick when she did not do chores or if she misbehaved in any way.

At age six, Winfrey moved to an inner-city neighborhood in Milwaukee, Wisconsin, with her mother, who was less supportive and encouraging than her grandmother had been, largely as a result of the long hours she worked as a maid. It was around this time that she gave birth to her half sister, Patricia who later died of complications of Cocaine addiction at age 45. Due to the financial strains of raising both daughters, her mother sent Oprah to live with Vernon in Nashville, Tennessee. While she was there, her mother gave birth to a third daughter. By the time Winfrey moved back with her mother, Lee had also given birth to a boy named Jeffrey, Winfrey’s half-brother, who died of AIDS-related causes in 1989.

She began attending Lincoln High School, Milwaukee; but after early success in the Upward Bound program, was transferred to the affluent suburban Nicolet High School. She says her poverty was constantly rubbed in her face as she rode the bus to school with fellow African-Americans, some of whom were servants of her classmates’ families. She began to steal money from her mother in an effort to keep up with her free-spending peers, to lie to and argue with her mother, and to go out with older boys.

Her frustrated mother once again sent her to live with Vernon in Nashville, Tennessee, although this time she did not take her back. Vernon was strict but encouraging, and made her education a priority. Winfrey became an honors student, was voted Most Popular Girl, and joined her high school speech team at East Nashville High School, placing second in the nation in dramatic interpretation.

She won an oratory contest, which secured her a full scholarship to Tennessee State University, a historically black institution, where she studied communication. Her first job as a teenager was working at a local grocery store. At the age of 17, Winfrey won the Miss Black Tennessee beauty pageant. She also attracted the attention of the local black radio station, WVOL, which hired her to do the news part-time. She worked there during her senior year of high school, and again while in her first two years of college.

This landed her the first job she had in radio while still in high school and began co-anchoring the local evening news at the age of 19. Her passion and emotional ad-lib delivery eventually got her transferred to the daytime talk show arena, and after boosting a third-rated local Chicago talk show to first place, she launched her own production company and became internationally syndicated.

The Oprah Winfrey show, or Oprah as it was popularly called on Television was an American Syndicated talk show that aired nationally for 25 seasons from September 8, 1986 to May 25, 2011 in Chicago, Illinois. The show was produced and hosted by Oprah herself and had a total of 4,561 episodes. Some of the most notable episodes being: the “Diet Dreams Come True” episode from November 15, 1988 has become one of the most talked-about moments in the history of show. 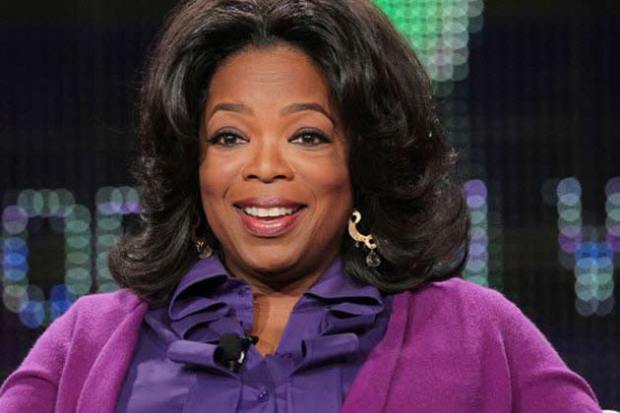 In 2007, the Marines of the Second Light Armored Reconnaissance Battalion Alpha Company and their naval corpsman, made the show their first stop after a seven-month tour on the front lines in Iraq. Winfrey welcomed the Marines with a big homecoming celebration where they were reunited with their loved ones on the show; the December 25, 1986 episode in which Liberace was the guest and he performed live and which ended up being his last TV appearance before dying 6 weeks later of Cardiac arrest.

The show has its roots in A.M. Chicago, a half-hour morning talk show airing on WLS-TV, an ABC owned-and-operated station in Chicago. Winfrey took over as host on January 2, 1984 and, within a month, took it from last place to first place in local Chicago ratings. Following Winfrey’s success in, and Academy Award and Golden Globe nominations for her performance as Sofia in the movie The Color Purple, on September 8, 1986, the talk show was relaunched under its current title and picked up nationally. Ironically, for the premiere, the show’s producers tried rigorously to book Miami Vice’s Don Johnson as the first guest, even trying to bribe him with Dom PArignon and a pair of rhinestone sunglasses.

All attempts to book Johnson failed and Winfrey decided to “do what we do best, and that is a show about and with everyday people”. The topic for the premiere show was “How to Marry the Man or Woman of Your Choice. Afterwards the show became an instant hit due to how much it related to the average American at that point and due to Oprah’s general charisma as a TV host. The show eventually lasted 25 Seasons with the final premier episode of the final season hosting a selected audience of 300 people with John Travolta being the guest, this aired on Monday, September 13, 2010.

The Oprah Magazine, sometimes abbreviated as O is a monthly magazine founded by Oprah Winfrey and Hearst communications. The magazines primary target market is women. The first issues of the magazine was published on the 19th of April, 2000. As of July 2004, it’s average paid circulation was about 2.7 million copies two-thirds of it being subscriptions. 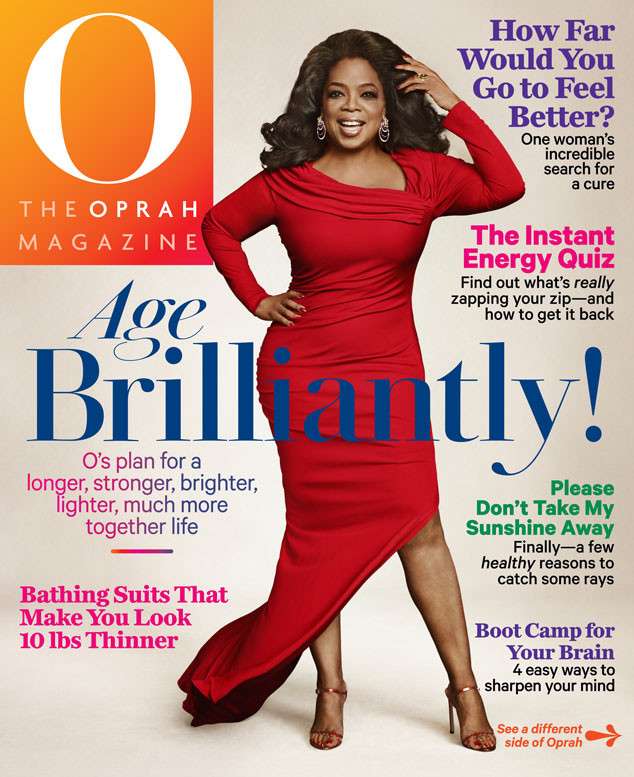 Oprah Winfrey appears on all the covers of the magazines. The first shared cover was the April 2009 edition where she and then first lady, Michelle Obama appeared on the Cover. The second shared cover is with fellow daytime host Ellen DeGeneres on the December 2009 Issue. The Oprah Magazine serves 63.6% Caucasian, 29.8% African-American, 8.8% Hispanic, 1.8% Asian and 6.6% other women. 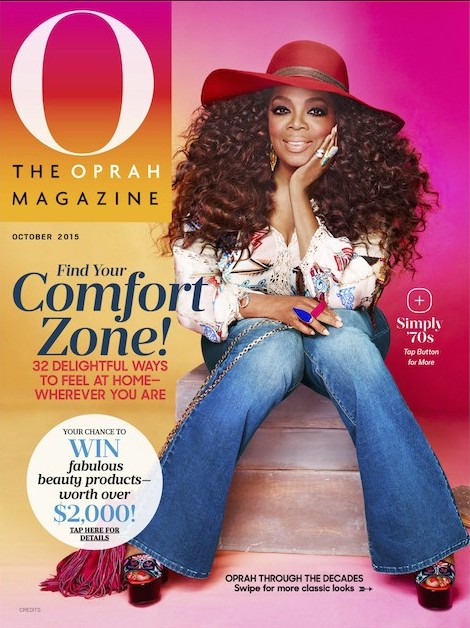 The mission statement of Oprah Magazine presented by O Media Kit is to “Live Your Best Life”. They also stated in their mission statement, “As the only magazine devoted to personal growth, O, The Oprah Magazine engages and addresses every aspect of a woman’s life – from beauty and style, to food, health, and more. We inspire, motivate and celebrate our reader’s journeys to live their best life.

The Oprah Magazine also has digital publications, the first issue being the December 2010 edition.

The Oprah Winfrey Network (OWN) is an American television channel owned by Harpo Studios and Discovery Inc. It is named after Oprah Winfrey, a former daytime talk-show host and it debuted on January 1, 2011, in approximately 80 million homes, replacing the Discovery Health Channel (DHC). It’s broadcast area is in the United States, Canada and Australia.

During its first week after launch in January 2011, OWN was watched by an average of 505,000 viewers. In late 2012, Tyler Perry partnered with OWN to provide it with scripted television programming. One of Perry’s series, “The Haves and the Have Nots” has consistently posted very successful ratings and has set a preeminent record on OWN, providing the network with its highest ratings to date. As of February 2015, OWN was available to approximately 81.9 million pay television households (70.3% of households with television) in the United States.

Oprah Winfrey has no children and has never been married.

Previous articleBlack Girls Chosen To Walk In The 2018 Victoria Secret Fashion Show
Next articleWhat you should know about Nigerian woman, Chi-Chi Nwanoku, who was ranked 9th in the World’s Music Most Powerful Women list