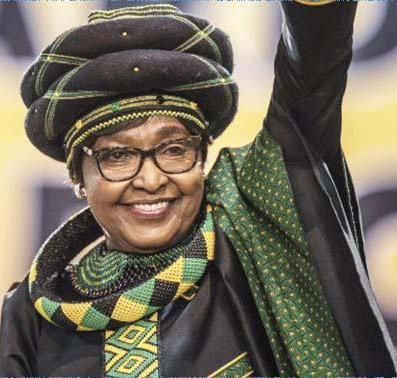 Winnie Mandela was born Nomzamo Winifred Zanyiwe Madikizela on the 26th of September, 1936 in the village of Mbongweni, Bizana, Pondoland, in what is now the Eastern Cape province.

She was the fourth of eight children which constituted seven girls and a boy. Her parents were named Columbus and Gertrude and they were both teachers; her dad was a history teacher, while her mum was a domestic science teacher. She endured the affliction of losing her mum at the tender age of nine, and after which, her family broke up and she and her siblings went on to live with different relatives.

This didn’t put an abrupt end to Winnie Mandela’s education as she followed through with her education and even ended up becoming the Head Girl of her High School in Bizana.

After High School, she went to Johannesburg to study social work at the Jan Hofmeyr School, despite the various apartheid laws enacted in South Africa at that time which more or less restricted the blacks in all spheres including education. She earned a degree in social work in 1956, and several years later earned a bachelor’s degree in international relations from the University of the Witwatersrand. She worked several jobs but her first Social Work Job saw her work in Baragwanath Hospital in Soweto.

She met a then Lawyer and anti-apartheid activist who bore the name Nelson Mandela in Soweto in 1957 when she was 22 years old. The couple married in 1958 and had two daughters, Zenani (born 1958) and Zindziwa (born 1960). However, with Nelson Mandela’s arrest in 1963 and not getting released until 1990, the marriage didn’t last much longer afterwards as the couple separated in 1992 and finally divorced in 1996, a huge factor being Winnie Mandela’s infidelity towards her husband while he was in prison.

Winnie Mandela was quite an anti-apartheid activist. Due to her political activities, she was regularly detained by the National Party government. She equally experienced being tortured, subjected to house arrest, kept under surveillance, held in solitary confinement for over a year and even banished to a remote town. She was however honoured for her activism, first in 1985 when she won the Robert F. Kennedy Human Rights Award along with fellow activists Allan Boesak and Beyers Naud for their human rights work in South Africa. And she also received a Candace Award for Distinguished Service from the National Coalition of 100 Black Women in 1988.

Winnie Mandela’s life was not void of controversies. Over the course of her life, Winnie Mandela was involved in a number of Violence and Criminal Proceedings, as well as Legal Problems. First of which was on 13 April 1986 during a speech in Munsieville where she endorsed the practice of Necklacing (a term used to signify burning people alive using tyres and petrol). She was quoted saying: “With our boxes of matches and our necklaces we shall liberate this country.”

She was also accused by her bodyguard, Jerry Musivizi Richardson, of ordering a kidnapping and Murder. This referred to the December 29, 1988 incident where Richardson, the then coach of the so-called Mandela United Football Club (MUFC), who acted as Mrs Mandela’s personal security detail, abducted 14-year-old James Seipei (also known as Stompie Moeketsi) and three other youths from the home of a Methodist minister, Rev. Paul Verryn, claiming she had the youths taken to her home because she suspected the reverend was sexually abusing them. The four were beaten to get them to admit to having had sex with the minister. Seipei was accused of being an informer, and his body was later found in a field with stab wounds to the throat on 6 January 1989.

In the same 1988, her home was burned by residents of Soweto, possibly as retaliation for the actions of the Mandela United Football Club, and in 1989, the United Democratic Front, “disowned” her for “violating human rights … in the name of the struggle against apartheid”.

In 1992, another accusation against Winnie Mandela arose in the form of the accused murder of a Dr Abu-Baker Asvat, a family friend who had examined Seipei at Mandela’s house, after Seipei had been abducted but before he had been killed.

The wave of the new Century brought with it new forms of allegations, this time in the legal aspect. On 24 April 2003, Winnie Mandela was convicted on 43 counts of fraud and 25 of theft, and her broker, Addy Moolman, was convicted on 58 counts of fraud and 25 of theft. Both had pleaded not guilty. The charges related to money taken from loan applicants’ accounts for a funeral fund, but from which the applicants did not benefit had initially carried a 5-year jail term as punishment. However, on appeal to a Judge in July 2004, a High Court in Pretoria ruled that “the crimes were not committed for personal gain”. The judge overturned the conviction for theft, but upheld the one for fraud, handing her three years and six months suspended sentence.

In January 2018, Winnie Mandela received an honorary Doctors of Law Degree (LLD) from the University Council and University Senate of Makerere University, Kampala, Uganda, for her recognition in the fight against apartheid in South Africa.

Winnie Mandela sadly passed away at the Netcare Milpark Hospital in Johannesburg on 2 April 2018, aged 81. Reports suggest she suffered from diabetes and had recently undergone several major surgeries. She is survived by her two children, Zenani and Zindziwa.