Women Need To Do More 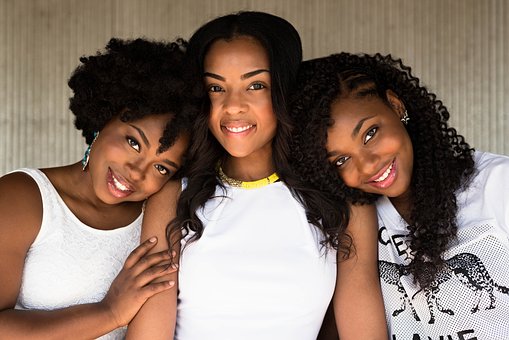 I’ve noticed one too many times that women find it difficult to ask questions, the reasons are few and far between. On issues that bother them, on societal issues, personal health or community, they would rather take the back seat, leave it up to the males to take charge every time. We as women and incubators of life should rise up and take our place in society. It will not be handed to us on a platter of gold. We females are most comfortable talking about hair and makeup, fashion trends, gossip, who’s getting married next and possibly, who’s marriage or relationship is on the verge of a collapse, that shouldn’t be so.

Can we take a few minutes to digest these:

1. Women don’t ask for a salary raise
In some workspaces, both male and female staff within the same department and cadre, doing the same jobs but it is found out that the male colleague earns more. Why is this so? The female finds this out and doesn’t bother to ask why, she doesn’t want to rock the boat, or, be seen as too troublesome or petty by asking for what is rightfully hers. It will not be handed to you, you have to go get it. Speak up, ask why, are your skills not enough to earn you that salary? Make an effort to learn a new skill every six months to be at par with the world of work, that way, you become indispensable.

2. Women don’t decide whether it would be a vagina-birth or C- Section
I’ve heard stories, countless to say the least, of women who were shamed and made to feel like less than nothing because they had a CS birth. My question is, does it make you as a woman any less of a woman and mother to have a child via CS? Does it make your husband less of a man and father? These are some of the things that we trivialize. Some pregnancies come with a whole lot of complications, the only way to save both mother and child is through CS. I heard the story of a woman who gave birth via CS, her sister-in-law came for the naming ceremony and made all sorts of allusions to the woman not being woman enough because of this singular act to save her own life and that of her child. The new mother quietly but firmly excused her sister-in-law from the house and the ceremony on the whole. In another case of a woman in labour, her husband had gone out to get a few items as asked by the doctor, the doctor then realized that the only way to save both mother and child was through an operation, he then walked to the pregnant woman, told her what the issue was and mentioned that he needed her husband’s consent before he went ahead with the operation, she didn’t wait one second, she collected the document and signed for herself and her husband. It was a matter of life and death, do you need someone to decide for you in this case?

3. Women don’t decide on society:
The world is still a patriarchal society but thankfully, there are more women involved in nation-building now than ever before, but not nearly enough. There are the likes of Mosunmola Umoru, a special adviser to the government on Agricultural matters, there’s also Aisha Ahmad: CBN’s Deputy Governor, among others. More women are needed in the corridors of power to help propagate the cause of women and help us assume a position where we can plead the cause of other women and bridge the development, the financial and social gap between both sexes;

4. Women don’t decide on wealth, they wait on their husbands and siblings:
The prayer of some parents is for their daughters to marry wealthy men, who would lift the family out of poverty and help train their younger children through school. But then, our parents and even some of us females forget that God has blessed us all, both male and female with a destiny that needs to be actualized. This is the reason why some ladies have thrown caution to the wind, would only date rich, wealthy men and do not improve on themselves because after all, they would get married to rich men. This is the time to become the wealthy man that your parents hope you marry, by pursuing your passion and being the best version of yourself.

5. Women don’t decide on their future, They take each day as it comes
As much as we know that man proposes and God disposes of, it’s in our best interest to plan what we want our lives to be. Where do we see ourselves in 5-10-15 years time? What do we hope to have achieved? What plans have we set in motion to that effect? I would rather plan and fail, than no plan at all. With failure, I can look back on the mistakes made, learn from them and improve on them for the future but without a plan, you go wherever life’s wind blows you. That’s not living, that’s existing.

Life dealt my family a hard blow at the death of my father, it was tough, it was rough. It took a whole lot of planning for the future and the grace of God crowning our efforts with success. I and my sister wanted higher education in the University, this was the gateway to getting good jobs and getting out of poverty and squalor. But how did we get money when admission into the University came calling? I worked as an usher and a model (I still model by the way) while my sister traded clothes, shoes and bags. So many roads they say, lead to the market. Do not be dependent on anyone, believe that God would send good people to help you but put your absolute trust in God. Decide on an honest job to do, do it with diligence and watch how doors of favour begin to open up for your good.

Think about this: you have the power to reinvent yourself, you can be both a masterpiece and a work in progress.

Previous article3 Part Spin-Off Comic Series For Dora Milaje, Black Panther’s Female Warriors, by Nnedi Okorafor
Next articleWhat Not To Do When Going For A Job Interview