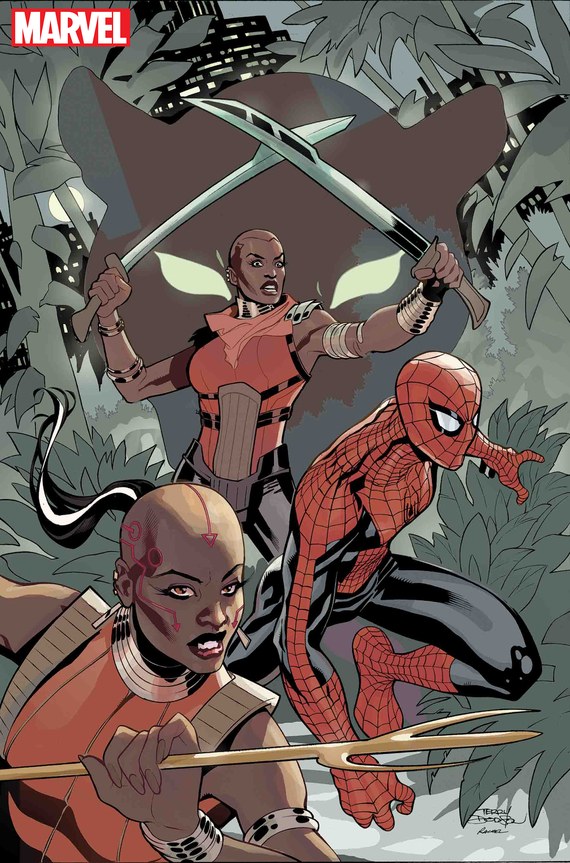 As anyone who has seen Black Panther can tell you, the Dora Milaje are a force to be reckoned with. The devoted female warriors sworn to protect Wakanda’s throne are an essential part of the boundary-breaking blockbuster so it should come as little surprise that Marvel’s latest release takes their story far beyond their service to their king, TChalla.

In Wakanda Forever: The Amazing Spider-Man, the Dora Milaje are finally getting their own arc, with Okoye, Ayo, and Aneka headed to New York to investigate a threat to national security, and connecting with Peter Parker in the process. Written by acclaimed sci-fi and fantasy author Nnedi Okorafor, with illustrations by Alberto Jimenez Alburquerque and Terry Dodson, the three-part comic will shed new light on the heroes who have become fan favourites. If the film whets viewers appetite for more adventures featuring the near-invincible trio, the new series promises to deliver all that and then some.

Typically when you see them, they’re with TChalla, representing and protecting him, Okorafor told Vogue. “Now you’re going to see the Dora Miljae for the first time as an independent entity; they’re not under the shadow of the throne.”

Okorafor has already won Hugo and Nebula awards for her game-changing fiction, which explores themes of Afro-futurism and fantastical mythology inspired by Nigerian folklore, but she’s found stepping into the world of comics no less gratifying. “It’s been amazing, and I’ve learned so much along the way,” says Okorafor, whose first book for Marvel, Black Panther: Long Live the King, debuted last year.

Presenting a vision of the African continent through the sci-fi lens felt completely natural. “I like to write the future; the Africa I feel can be and the Africa that will be, that has always been my vision,” she says. “With Wakanda, a place set in the present but with a futuristic outlook, it wasn’t a hard transition”.

Showcasing the complexity of the lead Dora Milaje presenting them not just as elite warriors with the ability to take down super-villains but as people, with problems, insecurities, and internal struggles also made perfect sense to the author, whose focus is always on the humanity within her superheroes. “I’m always interested in a challenge, so writing a narrative where it doesn’t feel heavy-handed but I can develop the characters through little subtle things [creates] my favourite moments, says Okorafor. “You feel that you can relate to these characters, and feel they are real, not just iconic, but also human.”

Translating an editorial vision into dynamic drawings involves constant collaboration with her team of illustrators, which Okorafor says is a welcome break for a writer. “Writing prose is a very solitary practice. Your editor comes in later on, but otherwise, it’s typically solitary. Working with an illustrator is [completely] different,” she explains. “The final project is the result of the first really elaborate collaboration. It’s like a dance of multiple skills that produce these wonderful works.”

Though it’s true that the timing has never been better for a story showcasing strong female characters, expect the plot to come first” not the politics. “It’s not going to be a diatribe that is going to say “these are the issues that are important” and have the characters exist to make a point,” says Okorafor.

“The writing will feature those things within the story, but it’s an adventure narrative.” Having topical matters woven into the story stays true to Black Panther’s winning formula, but even with the issues being handled subtly, the existence of a female-driven title makes a statement in and of itself. And that’s the thing about changing hearts and minds as you go about resetting the old standards there’s always more to take on. Who’s to say this won’t lead to a Dora Milaje televised series or another major motion picture? “This moment has been coming for a long time,” says Okorafor. “People have craved these types of characters for a while, and I don’t think that craving is going to pass; it’s something that is here to stay.”