What do you know about Danai Gurira? 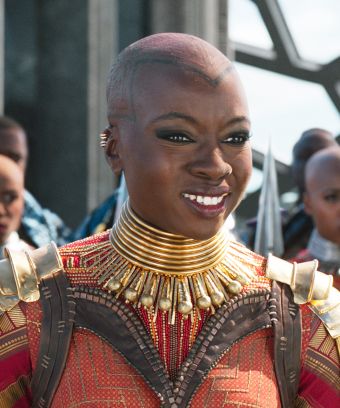 Danai Gurira was born on February 14, 1978 in
Grinnell, Iowa, U.S to Josephine Gurira, a college librarian, and Roger Gurira, a lecturer in the Department of Chemistry at Grinnell College. She is the youngest of four siblings and has two sisters, Shingai and Choni, and a brother, Tare. She speaks four languages: French, Shona, basic Xhosa, and English.

When she was much younger and still living in America  she was called ‘Dede’ because of the difficulty in pronouncing her actual name. It wasn’t when she was five and had moved back to Zimbabwe with her parents that her mother told her about her other names. According to her:

“I was in a country that was recently out of colonization, so there was a lot of regrouping the country was doing around its identity vs. the identity of their colonizer [the United Kingdom],” she says, languidly laying on a chaise lounge, in reference to her time living in Zimbabwe. “There [are] a lot of ways that I was being influenced by that culture, but there comes a point when you’re like, ‘wait a minute, what is so wrong with what we’ve got going on already? And why is it so diminished even in our own eyes, on our own land?'”

She lived in Grinnell till she turned five (5) in 1983 when her parents relocated to Harare, Zimbabwe, shortly after the country gained Independence. She attended high school at Dominican Convent High School. Afterwards, she returned to the United States to study at Macalester College, in Saint Paul, Minnesota, graduating with a Bachelor of Arts in psychology. Gurira also earned a Master of Fine Arts in acting, from New York University’s Tisch School of the Arts.

Danai Gurira is a playwright and an actress. She said she began writing plays in an effort to better utilize her strengths as an actress, and to tell stories that convey ideas about strong women with whom she identifies. She has taught playwriting in Liberia, Zimbabwe and a South Africa. Her career has seen her co-write and co-star in In the Continuum, first at Woolly Mammoth Theatre Company and later off-Broadway, which won her an Obie Award, an Outer Critics Circle Award, and a Helen Hayes Award for Best Lead Actress.

She made her acting debut in 2009 on Broadway in August Wlison’s play Joe Turner’s Come and Gone, she played Martha Pentecost. She co-produced a 2012 play titled The Convert alongside Goodman Theatre in Chicago and McCarter Theater in New Jersey. Later that year, Danai Gurira received an award, the Whiting award, for an emerging playwright. In January 2015, Familiar, a play written by Gurira and directed by Rebecca Taichman, opened at Yale Repertory Theatre. It later premiered Off-Broadway in New York at Playwrights Horizons. The play is about family, cultural identity, and the experience of life as a first-generation American, and Gurira has said that it was inspired in part by family and friends of hers. In the same year, Lupita Nyong’o starred in Gurira’s 2009 play, Eclipsed, Off-Broadway at The Public Theater. It was announced the play would move to Broadway in 2016 at the John Golden Theatre It was the first play to premiere on Broadway with an all female and black cast and creative team. The play is set in war-torn Liberia and focuses on three women who are living as sex slaves to a rebel commander, and is about how they deal with this difficult situation. The play was inspired by a photograph of female fighters and their tale of survival. It starred Saycon Sengbloh, Akosua Busia, Lupita Nyong’o, Zainab Jah and Pascale Armand and was directed by Liesl Tommy.

Sunai Gurira’s first acting gig was in the 2007 film The Visitor, for which she won Method Fest Independent Film Festival Award for Best Supporting Actress. She has appeared in the films Ghost Town, 3 Backyards, My Soul to Take, and Restless City, as well the television shows Law & Order: Criminal Intent, Life on Mars, and Law & Order. From 2010 to 2011, she appeared in the HBO drama series Treme.

In 2013, Gurira played a lead role in director Andrew Dosunmu’s independent drama film Mother of George, which premiered at 2013 Sundance Film Festival, a movie she received critical acclaim for, as she played the role of a Nigerian woman struggling to live in the United States. Gurira played rapper Tupac Shakur’s mother, Afeni Shakur, in All Eyez on Me (2017), a biopic about the rap star. She then starred in Marvel’s film Black Panther, which was released in February 2018. She played Okoye, the head of the Dora Milaje, the personal bodyguards of the Black Panther, and received critical acclaim for her performance. Gurira reprised Okoye in Avengers: Infinity War, which was released in April of the same year. To her, the role of Okoye and the other Dora Milaje has much more significance than face value. According to her:

“I think that a powerful woman of today has to be subversive, because what is conventional is not acceptable for us anymore. It’s unacceptable,” Also: “I’d say if there’s any little bit of Okoye I’d love anyone to have, including myself, is to subvert any lies that we’ve been told. [For example], she’s fierce and feminine. The two things live together quite contentedly in her, and I think that… we’ve been lied to about that too, and we can’t let that be perpetuated anymore. We can be all those things.”

Notably, in March 2012, Danai Gurira joined the cast of The Walking Dead. She plays the role of Michonne, a relentless Katana wielding character who joins a close knit group in a post apocalyptic world.

Danai Gurira is also an activist, in 2008 Gurira appeared at the Global Green Sustainable Design Awards to read a letter written by a New Orleans native displaced by Hurricane Katrina. In 2011 she she co-founded Almasi Art Inc., an organisation aimed at continuing Arts education in Zimbabwe. She serves as the Executive Arts Director. In 2015, Gurira signed an open letter begun by the ONE Campaign. The letter was addressed to Angela Merkel and Nkosazana Dlamini-Zuma, urging them to focus on women as they serve as the head of the G7 in Germany and the AU in South Africa respectively. In 2016, Gurira founded the non-profit organization Love Our Girls, which aims to highlight the issues and challenges that specifically affect women throughout the world. In the same year she partnered with Johnson & Johnson in a fight against HIV/AIDS.