Can men be feminists? How important is this question to the movement, and more importantly, how did you arrive at your answer?
Read more

Year after year, Victoria Secret puts together one of the most talked about catwalk show. It is usually the most watched fashion show with about 800 million people tuning in every year. Also, about 12 million dollars is spent on creating this event which is about the highest spend on fashion shows in the industry. For the 2018 Victoria Secret Fashion show, the lineup of the models walking the runway have been released and there are 12 black girls. So who are the black models walking the runway this year?

Mayowa Nicholas is a Nigerian fashion model who was a finalist of the 2014 Elite Model Look contest (along with Italian model Greta Varlese). She has starred in Dolce & Gabbana, Saint Laurent, and Calvin Klein campaigns. She has also worked with high profile designers like Prada and Versace.

Words cannot describe how happy and honored I am announcing that I will be walking the Victoria secret fashion show this year, Looking forward to sharing the runway with all the powerful and beautiful women in the show. Thank you so much to the entire Victoria secret team @10magazine @monica.mitro @ed_razek @johndavidpfeiffer @victoriassecret for believing in me again ❤️ Indeed God’s time is always the best🙏🏽

She is a 22 year old Australian model who finished in third place on the eighth cycle of Australia’s Next Top Model. She is a face of Fenty Beauty and made her runway debut at the Yeezy S/S 17 show.

words can’t express how much this means to me, thank you @victoriassecret for the opportunity of a lifetime. This moment means the world. Always believe you can do anything 🙏🏿 #vsfashionshow

Winnie Harlow who was born Chantelle Brown-Young is a 24 year old Canadian fashion model who also doubles as a spokesperson on the skin condition, Vitiligo. She was one of the contestants of the first cycle of the America’s Next Top Model.

I had a break down before i walked into the most nerve wrecking casting of my life. I asked my driver to go around the block twice before i could walk into the @VictoriasSecret offices so i could re coup, and remember (while my trainer @bodybymato reminded me on the phone through sobs – thank you lol) how hard I’ve been working! I went in and made new friends and saw old friends and it already felt like home! We patiently waited while @ed_razek @johndavidpfeiffer @monica.mitro @10magazine carefully took time to get to know each girl. When it was finally my time, within my nervous storm of anticipation i changed into a black Victoria Secret set and stepped out!!!! I spoke to them about Jamaica, @nick_knight , my abs, and how i was beyond honoured to be given the opportunity to try out.. then I walked for my life!!!! I can’t believe this!! Thank you for giving me all the energy and kindness in that room! Thank you for allowing me to walk for VICTORIA’S SECRET! Thank you to my agencies @firstaccessent @womenmanagementnyc @women_paris @thesquadmanagement my pr @remibrb my agent @mannyuk and mama bears #sarahstennett & @thelilmisse for having my back supporting and believing in me! I love you guys you’re FAMILY!! Thank you mommy for praying with me everyday for the past 3 days. And thank you so much to my fans who have been pushing me forward to this point in my career. I’m so blessed thank you Lord!! IM WALKING THE VICTORIA’S SECRET SHOW! Thank you Vogue for the exclusive interview 😭🙏🏽💗🙈

Leomie Anderson is a British model and designer who has been modeling since 2010. She was first selected to walk the runway for the Victoria Secret Fashion Show in 2015. She is also the founder of LAPP, a clothing brand, which she launched in 2017.

The face you make when you find out you’ve bagged @victoriassecret show for the fourth time in a row! Big thank you to @ed_razek @johndavidpfeiffer @monica.mitro @10magazine @fusionmodelsnyc for believing in me and everyone else for the constant support and encouragement, this achievement means EVERYTHING to me 🤧❤️🤯 #VictoriasSecretFashionShow

Isilda Moreira, who was born and raised in Portugal, is of the Cape Verde descent. She got discovered at the age of 14 while vacationing in London. She made her debut on the runway with Loewe and Moncler at the Paris Fashion Week.

I DID IT OMG 💗 if words could make justice to what i feel right now i would try to find a thousand of them and to describe what i am going through right now. as time rushes by i can only feel more and more overwhelmed by having one of my lifetime dreams coming true. every step i took alongside all these amazing beings who have believed in me and have brought me to simply tell you: I WILL BE WALKING FOR @victoriassecret 2018 SHOW #vsfashionshow thank you soooo much @victoriassecret ❤️🇵🇹

Melie Tiacoh is a model who hails from Ivory Coast. She was born in Paris and raised in Abidjan. She speaks two languages, English and French, and she writes a blog.

It feels so UNREAL! I cannot believe this is actually happening to me! *Pinch me!!!* THANK YOU SO MUCH @victoriassecret @johndavidpfeiffer Ed Razek @monica.mitro @10magazine for giving me the opportunity to walk the Victoria’s Secret Fashion Show 2018! WOW! 2018 will be by far the best year of my modeling career and YOU made my dream come true! I will be the first Ivorian 🇨🇮 model walking the show, but also the first Guinean 🇬🇳, and probably Lebanese 🇱🇧 -France and Italy were already represented before 😅- What an honor to represent Ivory Coast, Africa and Diversity ✊🏾 Thank you to my agencies and bookers who pushed me and encouraged me to never give up throughout ALL these years!!! @nextmodels @arthurdemarchelier @nextcanada @didier.belleguic ♥️♥️♥️

Zuri Tibby is an American model from Florida. She is the first black model to be the spokesmodel for Victoria Secret’s Pink. 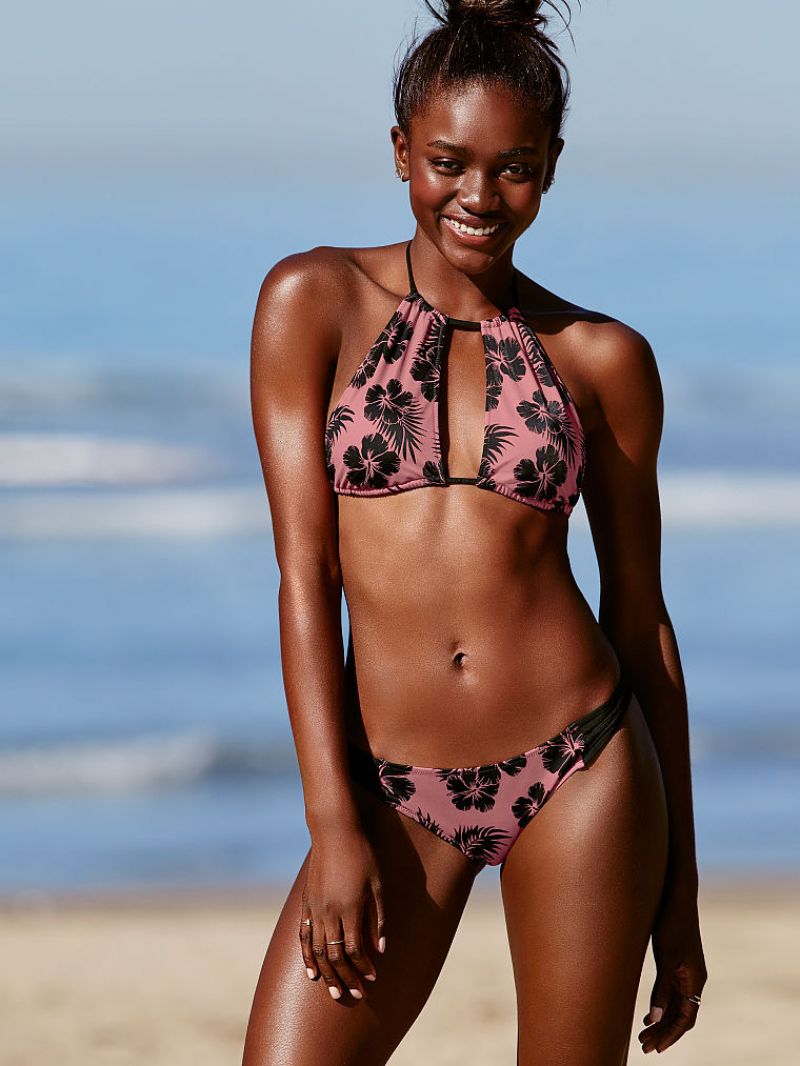 She is a South Sudanese model who is not a new face to the Victoria Secret runway as she was part of the 2017 lineup.

Herieth Paul is a Tanzanian model based in Canada. She has walked for Diane von Fürstenberg, Lacoste, Tom Ford, Calvin Klein, Armani, Cavalli and 3.1 Phillip Lim.

I watched my first vs show when I was 13 years old. I am so beyond excited to be walking my third @victoriassecret fashion show I am so grateful for this opportunity Thank you @johndavidpfeiffer @monica.mitro @10magazine @ed_razek1 and my amazing team @womenmanagementny @angiesmodels Ya’ll dreams do come true ❤️ #3

Lesha is a model and a vlogger.

Getting pulled off set to be given this news!!! After all the missed flights and back an forth from NYC to London this is the best news I could ever get ! Still feels like a dream…pinch me ❤️ BIG MOOD!!!😅@victoriassecret @johndavidpfeiffer @ed_razek @10magazine @monica.mitro @theeyecasting @newyorkmodels @elite_london #VSFashionShow #VS18

Read Also: What you should know about Nigerian woman, Chi-Chi Nwanoku, who was ranked 9th in the World’s Music Most Powerful Women list

Françoise Bettencourt Meyers was born on July 10, 1953, in Neuilly-sur-Seine, France. She is the only daughter of her parents, multi-billionaire businesswoman Liliane Bettencourt and French politician, André Bettencourt.
Read more
Beauty

Short hair can be fun initially, until you end up having the same look or style for 6 months straight. We get it! Hair-inspiration is not something that is easy to come by.
Read more
Editor's Pick

Can men be feminists? How important is this question to the movement, and more importantly, how did you arrive at your answer?
Read more
Lifestyle

Here Are Some Feminist Coven T-Shirts Which Are Absolutely Beautiful

So, if you are a member of the feminist coven, you should get in here to see amazing t-shirt designs you can proudly acquire.
Read more

Stella & Dot is excited to announce their Summer Kick-Off event! Shop up to 70% off from the comfort of home, and style out the weeks to come with fresh, lust-worthy looks.
Read more

Fashion Focus Africa, the talent-scouting arm of  Lagos Fashion Week, is firmly established as a platform dedicated to the development of designers across the African continent.
Read more