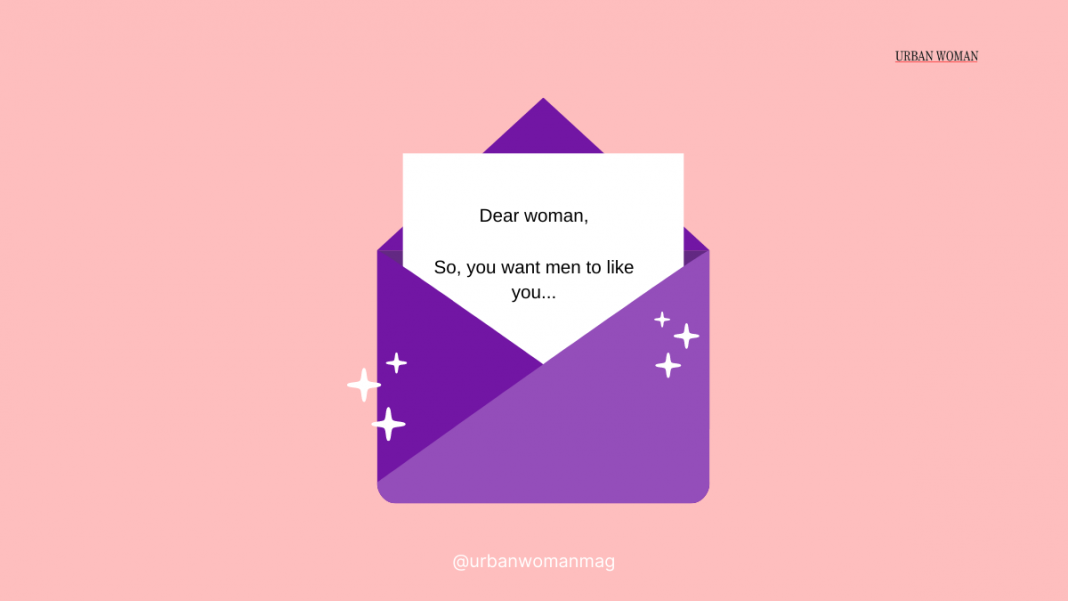 A letter from a woman who is tired of women who desperately want to be picked by men and do all they can to belittle feminism and the fight for gender equality.

So you want men to like you; you want them to think that you are different from other women and if it ever comes to it, you want them to ‘pick’ you over all the others. I get it. I used to be you and on days when I pretend to like vodka or laugh along with the boys at that sexist joke, I am you. I don’t know what your story is, but let me tell you mine in the hopes that you and I are not that different.

I started to crave the attention of men at a very young age. At the time, I could not identify this hunger to be noticed and approved by men because it felt like a normal thing to crave. It seemed to me that everything about us girls depended on how much and the kind of male attention we could get. The girls in fairy tales were ‘rewarded’ with husbands, the women in movies were preoccupied with men troubles and even my mother would constantly say “no man would tolerate that attitude” whenever I behaved badly. I did not know a lot but I knew right from the cradle that it was a man’s world.

On top of that, I struggled with my self-esteem and whatever worth I felt, was directly proportional to how much of a man’s attention and approval I could get. It didn’t matter who he was; a wink from the man next door gave me validation for the week. When my brothers complimented my food, it meant more to me than when my sister did and when my father forgot my birthday, even though it was not out of character for him and my mother had bought me my favourite snacks, it still ruined the day for me. More than anything, I looked forward to the day, I would be chosen by a man to be his wife. I am no longer a child and sometimes, I still find myself, albeit subtly, trying to get ‘picked’ by men.

Maybe we are indeed different. Maybe you were a confident girl and your parents never echoed sexist rhetoric to you. Maybe you already saw the faults in our stars and the story of Cinderella. Maybe you practised feminism before you knew there was a word for it.  Still, as long as you identify as a woman, the world places a lot of pressure on you to present yourself in a manner that is desirable to men and no matter how feminist you are, sometimes you may succumb to this desire to be accepted by men. If you fall into this category, it is for those moments of weakness that I write this.

I know the effort you put into this; of course, I would know, I have been there and have done some of these things. You tell people you are a feminist but ‘not that kind of feminist’ because you so badly want to assure men that you do not hate them and that your feminism considers their feelings. You think ‘twitter feminism’ is not ‘real feminism’ and comment FACT under every tweet that bashes feminism.

You never miss an opportunity to speak unkindly of sex workers and imply that girls like that are the reason why girls like you cannot find a good man. You keep the company of misogynists and laugh at their jokes about other women. Or worse, you simply think feminism is a joke and wish women would just shut up about rights and be submissive to their husbands (hello, Phyllis Schlafly). My short response to your efforts is STOP but my not so short response is

1. The Patriarchy Will Never Pick You

You’ll never be picked so stop trying. By picked, I mean that as a woman, you’ll never really benefit from patriarchy because patriarchy was not designed for your benefit. Being liked by the boys will not make you one of the boys, neither will it protect you from the boys. Heck! Being a boy does not protect the boys from the boys.

As a woman, you are vulnerable to rape, domestic violence, sexual assault, slut-shaming, victim-blaming, female genital mutilation,  gender pay gap, the glass ceiling and the other million and one ways through which the world enforces sexism.

You will never be free of these challenges by sucking up to the people who directly benefit from this system. I too am not free from the oppression but at least I do what I want while revolting against this system – even if that means getting on the bad side of its benefactors, men.

The energy you put into making yourself “less like other women” is sadly a waste because you are one wrong move away, in the eyes of these men, from being grouped with me, the man-hating bitch you try so hard to be different from. To be clear, you cannot sit pretty in this matter; you are either fighting the patriarchy or fighting to get picked. You’ll never be picked, so fight the patriarchy instead.

Putting aside the fact that you have been groomed to value a man’s attention more and the influence of heteronormativity, hence your desire to be ‘picked’ by them over other women, there is also the question of why you want to be picked/validated by anyone in the first place.

Since we have established that the latter is futile, you must now understand that the former, although the right thing, will not necessarily make you liked by everyone, even women. Yes I know we all wish we could be liked and approved by everyone but you’re not ice cream so prepare yourself for whatever approval or disapproval life throws at you.

As you go through life, I wish you many things. I wish for your success,  for your happiness,  love, for a positive self-image, for strong knees and a flexible back, for nice wigs and that dream job. Most of all, I wish you the good sense and courage to rebel against the patriarchy rather than fight to get picked. I am aware of how ambitious it is for me, a total stranger, to assume that my words would mean anything to you, but this is me trying.

Read Also: Is God a Woman?

Previous articleMariam Adedoyin-Olowe’s Story Of An Explosion of Purpose And Its Resulting Success
Next articleProfile of Aisha Pandor, Founder of SweepSouth