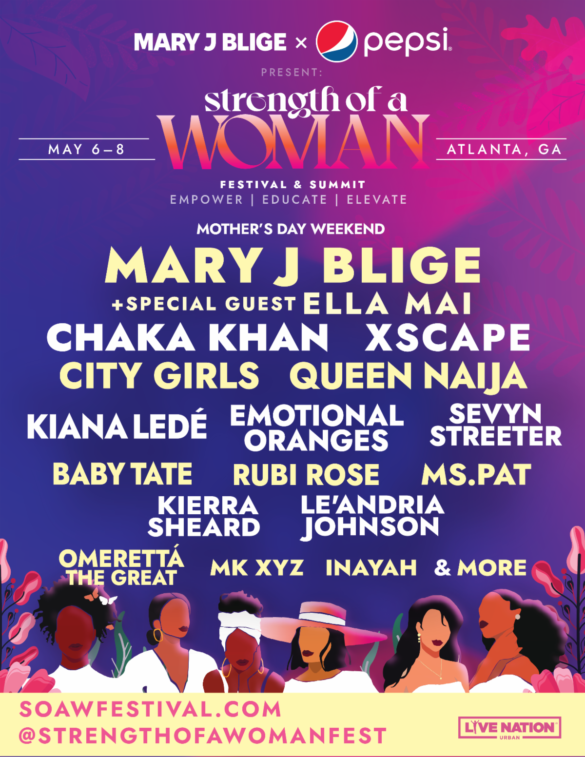 After performing at the Super Bowl and finishing up with Season 2 of Power Book (2), Mary J. Blige continues to make strides by announcing a new project- her inaugural Women’s Program.

Peter Dundas commented on Women’s Wear Daily, saying that the outfit made Mary J. Blige look like a “snow Leopard.”

He said, “I thought (the mirrors) worked really well with mary because she pulls so much on your heartstrings with singing about things that you kind of identify with yourself, she almost becomes a reflection of the audience as well.”

She performed her 2001 hit-songs  “Family Affair” and  “No More Drama”, wowing the audience with her displays and style.

Not wanting to stop her flow, Mary has now announced her inaugural music festival for women, and her collaboration with Pepsi.

Mary and Pepsi announced “Strength of a Woman Festival and Summit”, noting that it will be in partnership with Live Nation Urban.

The festival is scheduled to last for 3 days in Atlanta, specifically on mother’s day weekend, 06-08-22.

The program is going to be “unapologetically curated for and by women” and will include many activities like music, tech, beauty, wellness, live concerts, seminars on financial literacy and many more serious and entertaining events that will happen across the city of Atlanta.

Along with Mary, other performers like Ella Mai, Chaka Khan, Xscape, City Girls, Queen Naija, Kiana Lede, Kierra Sheard, Omeretta the Great; to mention a few will also be joining the music lineup.

“These are some of my favourite singers. They move the culture and have made us dance all of our lives,” Mary said.

She shared that her idea of the festival came from the listening party which she hosted recently.

“All the women from the streaming services were coming in stressed. They were picking up their wine and talking about the songs. “It became this big session about how each song made them feel and how it related to their lives. Just seeing that over and over and over again sparked an idea.”

Many women-owned and small businesses will be supported and advertised throughout the period of the festival.

Mary said, “Atlanta has been doing this for a while. It’s a big black entertainment hub. If we’re doing it for the culture and we’re doing it for us, do it there, Atlanta was always the most fun place to party and still is for me. I remember Jack the Rapper, and don’t get me started on Freaknik.”

According to Mary, “Get dressed. Get decked out. Let your hair down,” She said. “The strength of a woman is about us coming together to heal, to be examples for each other and to do some partying.”

Read Also: How to Buy Strength of a Woman Festival 2022 Tickets

Previous articleHow 16 Year Old Gregoria López, Sent Her Father to Prison for Rape in the 1600s
Next article25 Break the Bias Quotes for International Women’s Day 2022