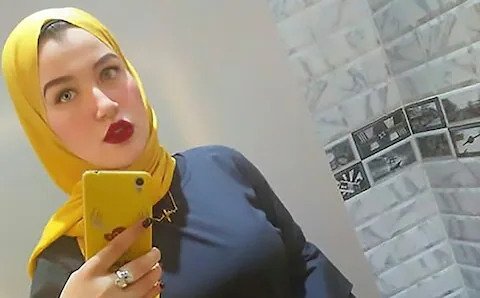 TikTok star, Haneen Hossam has been arrested after being sentenced to 10 years imprisonment for her social media posts.

The 20-year-old Cairo University student who is an influencer on the popular video-sharing app, Tiktok was sentenced in absentia.

She alongside four others were fined 200,000 Egyptian pounds which is equivalent to 9,160 euros for urging women to make videos and share them for money which the government considers Human trafficking.

Her lawyer speculated that she received a tougher punishment because she refused to appear in court for the proceeding.

According to Haneen Hossam’s lawyer, Hani Sameh,  it was her legal right not to show up and they hope that Hossam can get a reduced jail sentence or an acquittal.

The accused released a video the next day pleading for clemency, claiming she didn’t harm anyone.

Her arrest was the finale of the year-long legal proceedings against the five accused of “inciting debauchery” by putting out videos that the prosecutors claimed to have violated social norms in the very conservative Egyptian society.

Haneen Hossam was first arrested in 2020 after she posted a video online teaching women how to make money which the authorities claimed was promoting online prostitution. In her video, she said, “You will be able to form friendships with people in a respectable way”. However, the government did not take kindly to this advice.

In July, she was convicted alongside Mawaddah Al-Adham another influencer who was found guilty of sharing indecent pictures and videos on her Instagram.

However, the charges were overturned after all five of them had spent eight months in jail.

But with fresh charges of human trafficking, four were sentenced to six years each and Hossam, ten years in prison.

Mawaddah Al-Adham had posted a video of her in a shark onesie and dancing in a convertible online.

Hossam on the other hand, who wears a scarf posted a video on Likee advising women on how they can make money from just talking to people online and making live videos.

Ever since the rule of President Abdel Fattah el-Sissi, who came into power in the 2013 coup, female social media stars, singers, and dancers have become targets of the authorities.

The government has proceeded to institute stricter internet controls and blocked websites, monitoring social media accounts, etc. Any content considered “suggestive” is tagged and even prosecuted under vague offences like “misusing social media and “inciting morality”.

A couple of human rights groups have challenged and condemned the government’s abuse of power.

Rothna Begum, a senior women’s rights researcher at the Human Rights Watch said “These sentences against women and men represent egregious violations against free speech online, right to privacy and nondiscrimination and reveal the government’s continued persecution of women for their peaceful conduct online”.

The executive director of the Egyptian organization Women’s Center for Guidance and Legal awareness, Reda Eldanbouki said “Such a verdict restricts the right to freedom of opinion and expression and aims to control women’s bodies and impose guardianship over their actions.”

Hossam has since then deleted all previous social media activities and has released several videos begging for clemency.

In one of her videos, she said amidst sobs  “Ten years! I didn’t do anything immoral to deserve all this. I was jailed for 10 months and didn’t say a word after I was released… Why do you want to jail me again?”.

Read Also: How Domestic Violence is Enabled Under the Guise of ‘Settling’

Previous articleBumble Closed Its Offices To Give a Week’s Break To Burnt Out Staff
Next articleHow Does Pregnancy Affect Your Teeth?