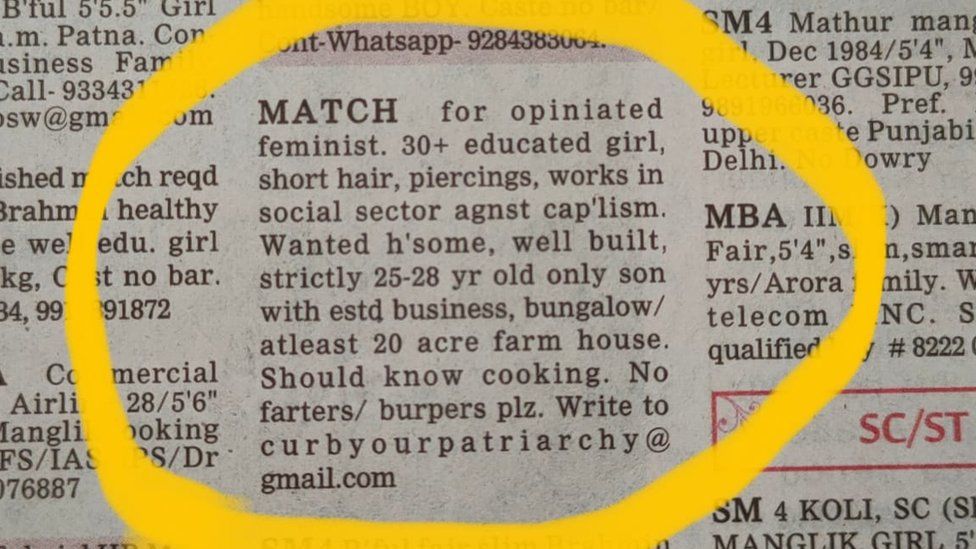 In India, women seeking marriage usually would not head to the newspapers to make an advertisement but this particular feminist is changing that narrative.

Indians are quite conservative, especially when it comes to marriage. They focus a lot on their religion, caste, and wealth when seeking a potential partner for themselves or their children.

Recently, an ad was put up on one of India’s top newspapers searching for “a non-farting, non-burping, handsome, rich feminist” male for a 30-year-old  “opinionated feminist with short hair and piercings”.

Responses from the ad include Aditi Mittal’s post on Twitter asking if someone put up an ad on her behalf and famous Bollywood actress, Richa Chadha, who responded by saying “someone out there is waiting for you”.

The ad turned out to be a prank between “the opinionated feminist” one Sakshi, her brother Srijan and her best friend, Damyanti who was the brain behind the idea.

Sakshi, who doesn’t want her and her cohorts’ identities revealed, spoke to the BBC saying  “we are all professionals with steady careers, and (hopefully) promising lives ahead of us and don’t want to attract “bloodthirsty” social media trolls”.

Srijan explained that the ad was a small prank they played for Sakshi’s 30th birthday. “Turning 30 is a milestone, especially because of all the conversation in our society around marriage. As you turn 30, your family and society start putting pressure on you to get married and settle down,” he said.

The ad appeared in over 12 northern Indian cities and cost them about $175. Srijan explained that the amount would have been expended on birthday gifts and celebrations. However, due to the pandemic, it was impossible to have any celebration.

On the eve of her birthday, Srijan reportedly gave Sakshi a paper roll containing the address [email protected] and the password. On the morning of her birthday, he brought a copy of the paper and they had a good laugh.

However, what began as a fun private joke soon attracted a lot of buzz on social media as celebrities began to share and make comments.

This attracted a lot of emails to the email address. While some of the messages came from “interested” suitors, others were hate mails from anti-feminists.

India is quite conservative and feminists who live there are often considered bitter, man-hating by both men and women. This is because the entire country’s system, culture is deeply rooted in the patriarchy. Sakshi was called many vile names including a gold digger, hypocrite, and cougar. While some emails were just plain insulting and disrespectful, others were even life-threatening.

Sakshi believes the ad hurt a lot of people’s egos.

“You can’t say such things out loud. Men ask for tall, slim beautiful brides all the time, they brag about their wealth, but when the tables are turned, they can’t stomach it. How could a woman set such criteria?” she asked.

She mentioned that the ad was only a satirical statement and she had only one question for the people who were triggered,  “Do you send such triggered emails to all the sexist, casteist ‘bride wanted’ adverts that appear in the papers every day? If not, then you need to curb your patriarchy”. She asserted.

Read Also: “It Is Not Good For Man To Be Alone” Is Not A Marriage But Feminist Text