Kate Capshaw, is a retired American actress known for her dramatic and compelling performances. Kate Capshaw was born in Fort Worth, Texas. She is the daughter of Beverly Sue a travel agent & beautician, and Edwin Leon Nail, an airline employee.
Read more

Kristy Hinze was born on the 16th of October 1979 on the Gold Coast, Australia. She is an Australian model, actress and television host.
Read more

Susan Dell was born to Marilyn Ely Lieberman and Zelig Lieberman. Susan comes from a family of high achievers. Her father Zelig Lieberman was a doctor, and he worked at the Baylor Medical Centre in Dallas, Texas.
Read more

I love to travel and so, I try to seize the opportunity as often as I can. On this particular trip, I was to visit Kaduna for a conference – The Digital African Woman Business Pitch. In preparation for my trip, I had to book my flight down to the North. I tried booking Lagos to Kaduna but the flight prices were quite exorbitant, as they went from 40,000 Naira upwards.

I was travelling on a budget and so, I had to ensure that I did not spend so much on my trip. I have a friend who is based in Kaduna, and so I called her to find out about the train service from Abuja to Kaduna. She had totally great reviews to give about the trains which plied the route. And so, I was quite optimistic that I was going to have a great experience. I was about to find out otherwise. I was going to book a much cheaper flight for 27th July 2018, from Lagos to Abuja for about 20,000 Naira and then, take a train down to Kaduna from Abuja.

My flight from Lagos landed Abuja at about 10:30am; we had left by 9:30am because the flight was delayed. It was a totally awesome experience travelling with Air Peace. The journey was smooth, and I think it is one of the smoothest I have had travelling within Nigeria. It was only beaten by my return trip via the same airline, on which I did not even feel a single bump. I felt like I got into the plane and got out when it was time to land. 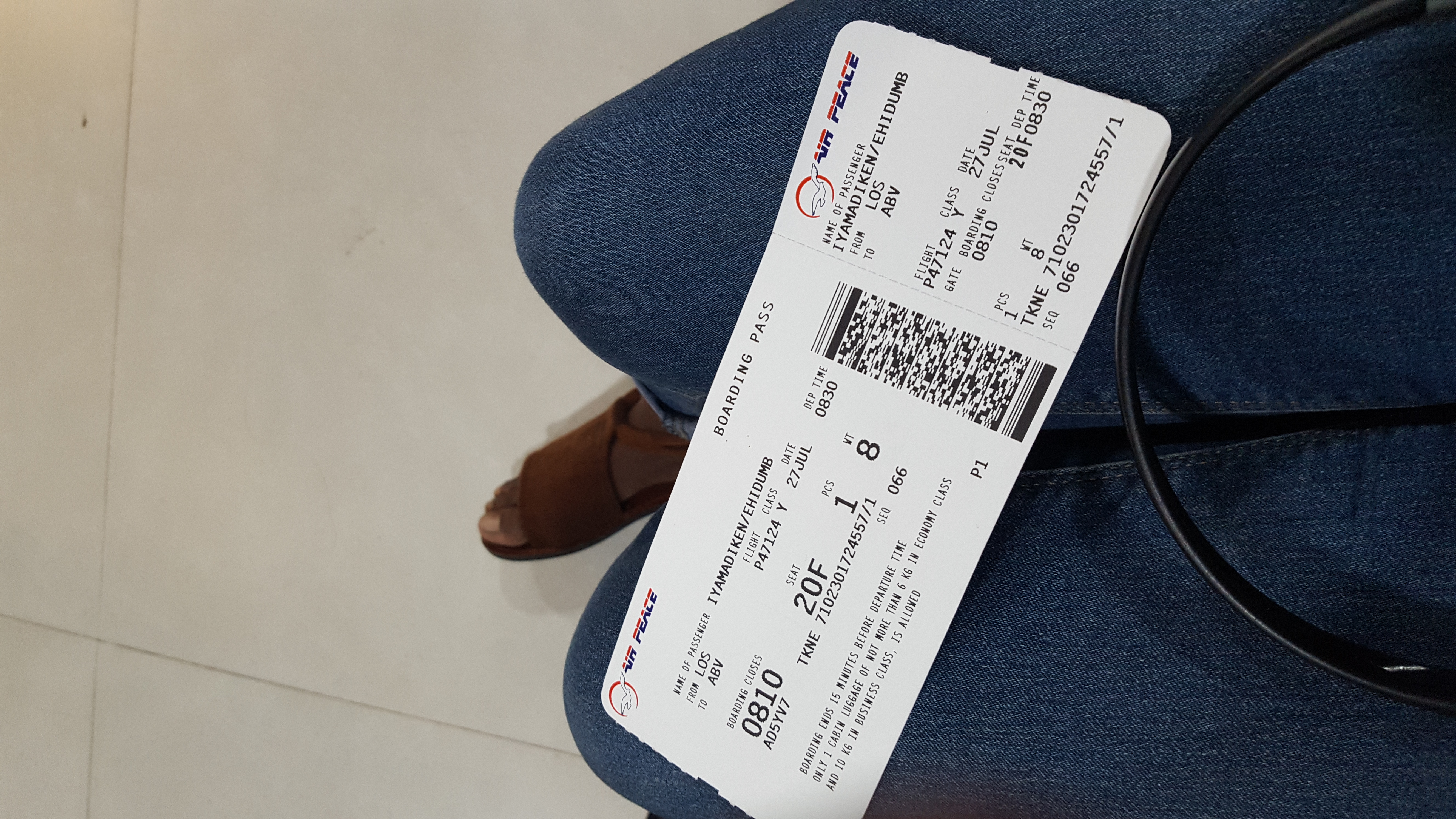 By the way, I think Nigerian airports should do something about their speakers. You can barely hear a thing when the flights are being called. In fact the best way to find your flight is to look for people going the same route as you are and seat with them, so that when the flights are being called you can rely on not just your own judgment of what was said, but theirs too.

Anyway, I got to Abuja at 10:30 am and proceeded to the Idu train station. It was a 30-45 min ride as Idu is on the outskirts of Abuja. I was excited that I was getting there by 11am which meant I could easily buy the 2pm train ticket and be in Kaduna by 4pm latest. I was to be greeted with a shocker!

I got to the train station and found out that all tickets had been sold out. 12pm and 2pm tickets had been sold out and what was left was the 6pm tickets. This wasn’t what I was told initially. According to what I was told, flight tickets were sold an hour before the train was to leave. So, you can imagine how amazed I was. The train station was full with people who in the same situation as I was. According to them, this was the first time this was happening.

I was shocked to say the least, as I had to wait for 4pm, when I would purchase my tickets for the 6pm train. People got frustrated and soon, half of the people present there began to leave. Apparently, they were going to take buses.

I would have joined them, but I dared not. I had read stories of how robbers were kings on the Abuja to Kaduna road, and how robbery was an almost everyday occurrence.

I didn’t want to take the risk and so I decided that I was going to be patient and wait. By 2pm, tickets for the 6pm train started to sell. Apparently, the attendants couldn’t wait for 4pm because of the large number of people present there. I could also see some of them hoarding tickets for people who had called earlier for tickets to be kept for them.

Anyway, I bought mine and waited. The 1st class tickets cost 3000 Naira, while the economy tickets cost 1500 Naira. The Idu train station was quite comfortable. It had really nice seats, was even cleaner than most Nigerian airports I had been to. It also had a lot of charging ports so I could charge my laptop, and work while waiting for my train to come.

At exactly 5:30pm, the train arrived, and we began boarding. By 6pm the train left. I could see people running towards the train, but the train did not wait for them, thanks to the strict time rules being observed by it. We went on to pick people at the Kubwa train station, still in Abuja, and proceeded to Rigassa train station, Kaduna.

I got to Kaduna that evening by 8pm exactly when the train was expected to arrive. To be very honest, I was quite impressed at the level of orderliness displayed by the passengers on the train. It was dark already so I didn’t have the opportunity to look around and admire the train station.

On Sunday 29th July, I was to come back to Lagos using the same route I took the Friday before. Trust me, as a sharp Lagos girl. I did not wait for anybody to tell me anything. I quickly ensured that someone was at the train station as early as 9 am to buy my ticket for me. I was not going to let anybody make me miss my flight back to Lagos, because I was sure that if Friday’s incident repeated itself, it wasn’t going to be funny.

I got to the Rigassa train station the next day by 10am for a 12pm train, and guess what?! Tickets had finished and were going to be sold at 4pm for the 6pm train. (Was I sharp or not?)

The train station was full of angry people, I just collected my ticket from the person who had bought it for me, and proceeded to wait for boarding time. Now I had time to look around this train station – Rigassa train station. It was not bad, but it was still nothing like the Idu train station. The chairs were not enough to seat everyone of us, and a lot of people were standing outside.

We left soon enough and it was a smooth ride back to Abuja.

Kate Capshaw, is a retired American actress known for her dramatic and compelling performances. Kate Capshaw was born in Fort Worth, Texas. She is the daughter of Beverly Sue a travel agent & beautician, and Edwin Leon Nail, an airline employee.
Read more
Notable Women

Kristy Hinze was born on the 16th of October 1979 on the Gold Coast, Australia. She is an Australian model, actress and television host.
Read more
Notable Women

Susan Dell was born to Marilyn Ely Lieberman and Zelig Lieberman. Susan comes from a family of high achievers. Her father Zelig Lieberman was a doctor, and he worked at the Baylor Medical Centre in Dallas, Texas.
Read more
Notable Women

Kamala Harris was born Kamala Devi Harris on October 20, 1964, in Oakland California. Her mother, Shyamala Gopalan, a biologist whose work on the progesterone receptor gene stimulated advances in breast cancer research is of Indian descent, while her father, Donald J. Harris, is a Stanford University professor emeritus of economics who is of Jamaican descent.
Read more
Notable Women

Angela Merkel was born Angela Dorothea Kasner on July 17, 1954, in Hamburg in then-West Germany, moving to East Germany as an infant when her father, a Lutheran clergyman accepted a pastorate in Quitzow, Brandenburg.
Read more

Lagos Living: Marcelino Lagos Didn’t Quite Live Up To My Expectations

Most of the greatest discoveries were made by accident; Cornflakes, chocolate chip cookies , the microwave, you name it , but this post isn’t about the unhealthy amount of accidental culinary discoveries I know. This article is about how the search for a beautiful location led me to finding the worst ice cream I had ever had in Lagos at Marcelino Lagos.
Read more

I visited Gypsy's restaurant (an Indian restaurant in the heart of Ilupeju, specifically on 34a Gbolade Adebanjo St, off association avenue, Ilupeju, Lagos) on my birthday and it was more or less a decision I made on the eve of birthday.
Read more

I Visited Lufasi Park, And Here Is What I Think About The Place

Lufasi park is a nature park located in Lagos along Lekki-Epe Expressway, around Sangotedo area (a little after Lagos Business School). I have wanted to visit Lufasi park for the longest time, so when my friend decided that she’d like to have her birthday picnic there and invited me, of course I jumped at the offer.
Read more