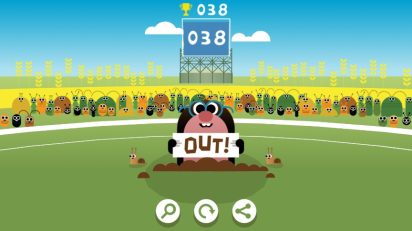 From April 27th and for the next two weeks, Google would be re-launching its popular Google doodle games in a new series of 10 Doodles. For many of us, the boredom has gotten to its peak this lockdown period. This is why Google would be showcasing a popular game from a past Doodle every day for the next two weeks. Each Doodle is a callback to a popular game. In previous years, Google has been known to feature a huge number of games and minigames on its home page and all these games have been archived on the Google Doodle Blog.

Now you have something to play with while you are stuck at home. Today’s (April 27) Doodle is the 2017’s Coding for Carrots game in which you complete steps to guide a rabbit to a carrot. This game goes as far back as 2017 and was used to originally celebrate the 50th anniversary of Logo, a programming language for children.

The Google doodle game for tomorrow, April 28th, is a Doodle that celebrated the ICC Championships Trophy 2017 by letting you play cricket as a cricket.

Nine additional games are listed as “coming soon”. A statement released by Google on its Google Doodles website reads thus,

As COVID-19 continues to impact communities around the world, people and families everywhere are spending more time at home, In light of this, we’re launching a throwback Doodle series looking back at some of our popular interactive Google Doodle games!

It is exciting to see that companies are being sensitive to the plight of their consumers. These are indeed interesting times!

Read Also: What Corona Virus Means For Your Relationship