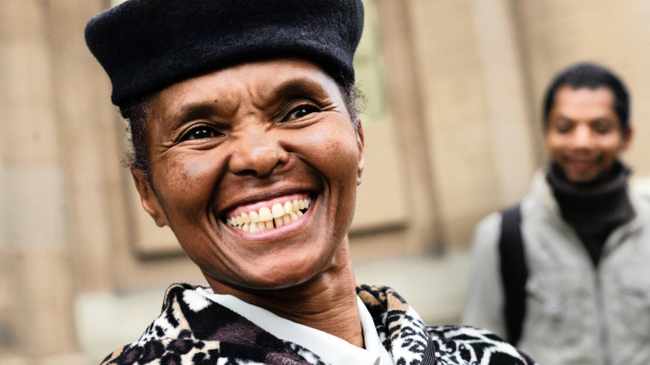 Patricia Nombuyiselo Noah is the mother of world-renowned comedian and Daily Show host Trevor Noah’s. She is a Xhosa woman from South Africa’s Xhosa community and she currently lives in Johannesburg, South Africa. Patricia was born in South Africa to Temperance Noah and France Noah.

As a child, she was labelled a troublemaker and a rebel. Her mother claimed that she never properly behaved like a girl should have done.

When she was nine, she asked her mother’s permission to go live with her father. Her mother obliged, but her father sent her to stay with her Transkei-based sister for the next 12 years. At her aunt’s home, she resided in a shack with 14 of her cousins from various parents.

At the age of 21, Patricia attended a missionary school where she learnt English and began studying typing. She then moved to Johannesburg at the age of 22 in order to live her own life.

On February 20, 1984, Patricia gave birth to Trevor in Johannesburg for Robert, who was almost twice the age of Patricia. He was of Swiss/German ancestry. This makes Trevor a mixed child.

Trevor was born at a time when apartheid was still legally enforced in South Africa, and interracial dating and marriage were prohibited by law. It was also unlawful to fall in love with someone of a different race. You ran the danger of being imprisoned for five years if you were discovered. Hence, she kept Trevor hidden for most of his childhood after giving birth to him.

She had to pretend she was not Trevor’s mother on several occasions, and once, she had to save him by tossing him out of a vehicle. All of this was done in order to avoid being caught up in the long arm of the law, which defended racism. Patricia also converted to Judaism when Trevor was around 10 years old.

Patricia married Ngisaveni Abel Shingange, who was abusive to her throughout the marriage. She left the relationship after he tried to kill her. They had two children together, Andrew Shingange and Issac Shingange, before getting divorced legally in 1996.

In 2009, Abel Shingange tracked Patricia down and shot her in the face and back.

Shingange was sentenced to three years of correctional supervision after pleading guilty to an attempted murder charge in August 2009.

She was aged approximately 50 in 2009, the year of the shooting, according to Trevor Noah’s book Born a Crime. Abel Shingange was found guilty of attempted murder but received only probation as punishment.

What Can We Learn From the Legend

From above, we see how the legend Patricia struggled to evade the troubles she encountered in life, dedicated to creating her son Trevor’s chances of education and strong spirits, and keeping independence for her own career. Her stories have a certain influence in that era and even today. Be Strong Women is not only a slogan, but needs the inner drive like a fighter and breaks beyond limits.

At the moment, it’s necessary to speak out about your attitude and be an advocate with these custom soft enamel pins related to women’s power and self-pursuit. Be your own queen and live for yourself.