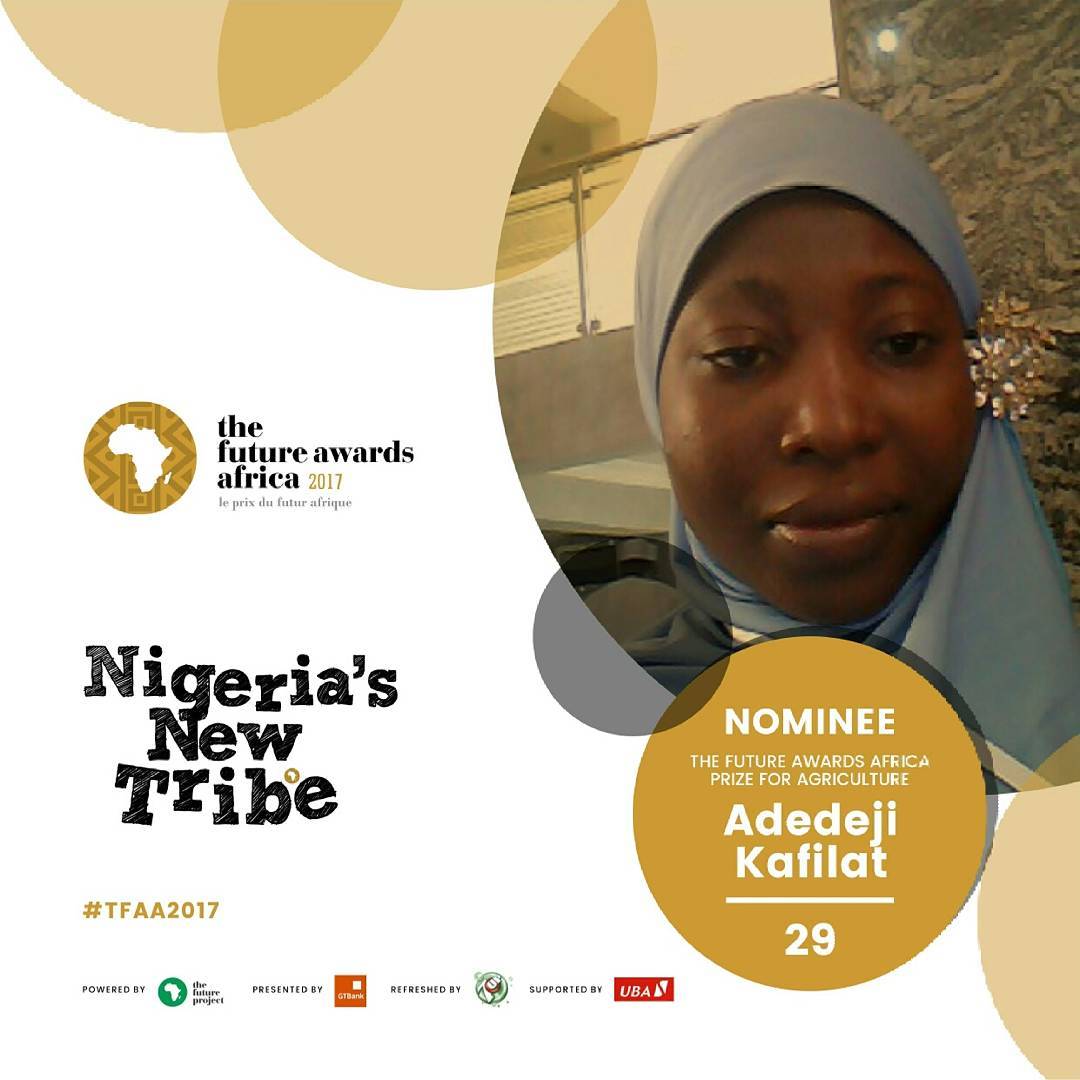 Recently nominated for The Future Awards Prize In Agriculture is Kafilat Adedeji an agrotechpreneur, a trainer and consultant. She is the CEO of PA Agro Industries. She says, “At PA Agro-Industry, we supply farm produce directly to consumers all year round using innovative technology, like mushroom cultivation technology, vertical farming, 3D Printing, to develop smart simple and sustainable urban micro-farm kit”.

Agriculture has been her passion right from her undergraduate days. ” I studied Agriculture for five years and I had been practising while in school. After my graduation, I worked as an Assistant Farm Manager, on a farm.

Even during my youth service, I served in a Federal Education Basin. I can’t do anything outside agriculture. I realized that I have been able to amass a wealth of knowledge and so working for someone was going to be quite limiting, and that was why I decided to launch my own agro-business which I started immediately after my Masters”.

Describing how she started up her business, she says, “One of my mentors had called and asked if I could do something for her organization and I said yes. Immediately, I approached my father so I could use his business name, because, she had said she wanted an official business name doing the projects and he agreed. Before you know, I registered my own company”.

Right now, she has started her PhD in Plant Science which she does alongside her business. Starting up a business can be challenging, much less an agricultural business. She says, “It has been challenging so far, not very easy. At a point, we had to start battling with the market, other times, it is about finances, or even getting people to work for you. All in all, we have been pushing. We have the technical know-how, so the moment we have a problem, we start thinking of how to solve the problem”.

Since her niche is mushroom production, and knowledge of mushrooms in Nigeria is pretty low, one wonders what the acceptance rate of her farm produce is. “We had a market survey and realized that people love the product, and would take it when given for free, but when it comes to buying it, they won’t. And so, we realized that we were targeting the wrong market, and started to restrategize.

We decided to test out delivering to supermarkets and it turned out pretty well, however, scaling to meet supermarkets demands became another issue and that resulted into another issue of finance, we had to expand our farm estates etc”. She goes on to say that, “Land acquisition is also a problem, we are trying our best to go through the government. Right now, we are having a problem with land we acquired and it looks like going through the government is more secure because this time, we are not dealing with an individual”.

Kafilat mentions that there is a social aspect to the farm business, she says, “The social aspect of our business is the training aspect. We conduct training on farmers in the aspect of mushroom cultivation. It is a part of agriculture that is still alien in Nigeria. We are part of the few who know about it. We are able to also train youths. Mushroom cultivation is something that can be done in a very small space. You can start with 22″—10 feet. For the past 1 year, we have trained up to 500 youths. Our training has also been a source of income for us too. We have online training where people can learn for free, but when they want to go further into hands-on training, they can get it on the farm for a fee”.

Her plan for the next five years is to have farm estates in three parts of South Western Nigeria, Osun, Oyo and Lagos state. “The farm estate is targeted towards research and training and also to have a base for our organic farm produce. We also want youths to get trained and get paid on the farm. We also need to increase our production scale so we can meet present market demands and also export produce. By 2020, we plan to be a household name in farm produce distribution”.

Previous articleWhy We Think Skinny Girl May No Longer Be In Transit
Next article#30Voices – Meet Sandra Onwuekwe, A Medical Doctor And CoFounder EcoPrune, A Social Enterprise Focused On Waste Recycling