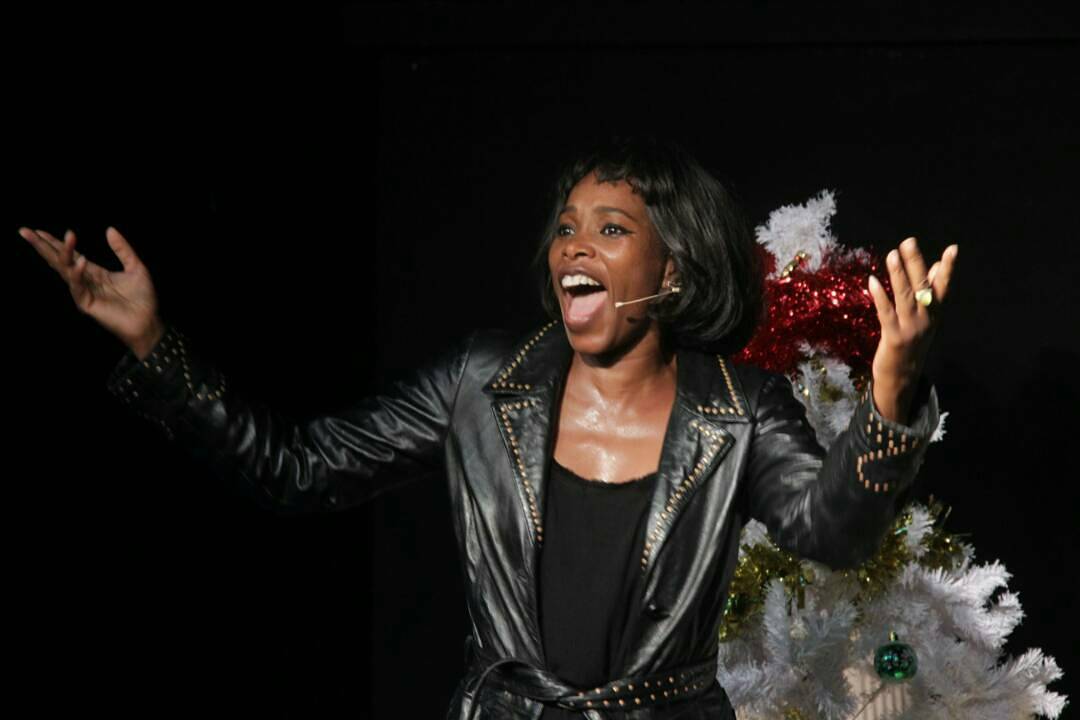 Let’s hear a little about your background:

I was born in Lagos Nigeria. I lived here till I was about 10 – 11 before I left to school in Europe. My parents were here so I was still connected. I had my university education in London where I got my B.A in French and Literature. After which, I went to live in Paris and I started working with a film production company with a Cameroonian Director. There, a friend of my husband asked me to perform. Initially I was skeptical because I wasn’t an actress and only did drama at school, but then, I decided to do it. The performance was at the prestigious OdÃ©on-Theatre de l’Europe in Paris. And from then on, Theatre and I developed a chemistry and it has been my profession for twenty three (23) years.

What inspired “My Nina Simone Trip”?
I remember in 1999, when I was performing a French play, one of the actors said, ” Oh, you remind me of Nina Simone” and I just thought to myself that it was only because I was black, or because I sang a bit, or because of the depth of my voice that she said what she said, and so, I never paid attention to the comment. I knew of Nina Simone, her music, but it was really when she died in 2003 and I was reading this article in the newspaper that I felt this huge connection and I became occupied with thoughts about her, I started reading a lot about her and I just wanted to know her.

What was the experience like, being the producer, the script writer?

Being a producer, it is not easy to do everything. I didn’t realize it earlier on. When I wrote, I wasn’t being practical, I just wrote what came to my inspiration. With the director, she would say, bring out this, bring out that and I would say, “err…no”. And this is because when I wrote, I didn’t factor a lot of things in. And when it comes to bringing out what is on paper and putting it on stage, it is a whole different ball game. Producing it, organizing it, was just God’s grace, and I have a great team. No man is an island, I wouldn’t have been able to do it alone.

How were you able to gather these talented people especially since you aren’t living in Nigeria?

I come as often as I can, and my mother lives here, and the director, Najite Dede who is actually my cousin helped me. Also a friend of mine who I met last year, Qudus Onikeku, a dancer and choreographer with whom I performed at Freedom Park last year and in Abuja helped me. Through him, I met Mathew Yusuf from One Night House Crew; Abolore Sobayo, an artiste and set designer; and Najite helped me get the production manager, stage manager, even the musicians. She basically helped me put the team together.
What were your highest points and lowest points in this production?
My highest point was when we finally did it. When we had our first performance and I went Yes!!!! We finally did it!!!! My lowest point was when I got exhausted and then, the stress on my voice. At times, I doubt my capacities and tell myself that I would never be able to learn all those lines.

How similar or different would you say your life is from Nina Simone’s?

She is black, a woman, a performing artiste. I am black, a woman, a performing artiste. Though, I am not a singer, I am more of an actress. She lived in France, and died in France, I live in France but I do not want to die in France. There is really that connection of how you are seen by people in a place that is not your homeland. How she really loved Africa, though she was black American, she didn’t like America. She felt connected to Africa, which is also why it was important for me to create this first, here in Africa. Not in France, but in Nigeria, the first country in the African countinent where Nina stepped. To me, I want to make her soul or spirit feel appeased, because she did not live a peaceful life.

What are your plans for the future?

I hope to tour with this, take it to Abuja, Ibadan. I want this to be my entry ticket back to Nigeria. I want to come and live here with my children. I miss home. I have been trying for four years to come back. It isn’t easy, especially because I have my family rooted there in France.

Previous articleIreti Bakare-Yusuf: It Is Time For Nigerian Women to Stand up Against Sexual Predators
Next articleMovies To Look Out For In 2018