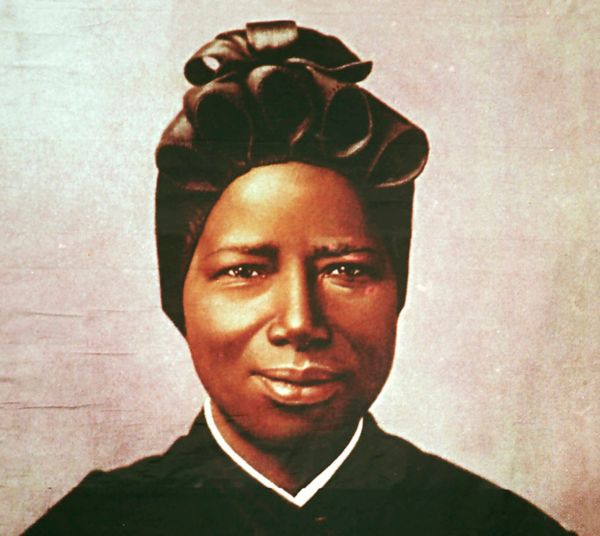 Josephine Margaret Bakhita was a Sudanese-Italian Canossian religious sister. She was born in 1869 in the hamlet of Olgossa, west of Nyala, in Darfur (now Sudan). Her respected and relatively rich father was the local chief’s brother.

Her parents had not given her the name ‘Bakhita’ when she was born. It is reported that the stress of her kidnapping forced her to forget her own name and take one given to her by the slavers, Bakhita , which means ‘happy’ or ‘fortunate’ in Arabic. She was also compelled to convert to Islam.

Bakhita was bought by a wealthy Arab and mistreated as a maid for his two children. Her fourth owner was a Turkish commander, and she was forced to serve his mother-in-law and wife. “I don’t recall a day passing without some wound or another over all the years I remained a slave,” she says.

She was disfigured by a method that resembled both scarification and tattooing during her time as a slave in Sudan. Her breasts, abdomen, and right arm were all pierced with 114 elaborate designs. She claims that the most horrifying memory she has is of being marked with flour and salt, along with other slaves.

Callisto Legnani, an Italian Vice Consul, acquired her in 1883 but did not beat her. Bakhita requested to accompany him to Italy when he had to return, and the two of them managed to flee a surrounded Khartoum.

Bakhita was rescued from Khartoum in 1884 and taken to Italy, where she became a nanny for the Michieli family. She stayed with them for three years and was known as ‘Mimmina’ to her new owners.

Josephine Bakhita entered the Canossian Sisters’ novitiate on December 7, 1893. Between 1935 and 1939, she resided at the Missionary Novitiate in Vimercate (Milan). Her entire life was fueled by a strong missionary zeal – “her mind was always on God, and her heart in Africa”.

Bakhita spent 42 years in Schio as a chef, sacristan, and portress, and had extensive contact with the locals. During WWII, she shared the peasants’ fears and hopes, and they looked up to her as a saint. Sor Moretta or Madre Moretta (“mother Moretta”) is how Vicenzans refer to her now (“black mother”). The first publication of her story (Storia Meravigliosa by Ida Zanolini) in 1931 made her famous across Italy. She lived in Italy for 45 years and She lived in Italy for 45 years and died on 8 February 1947, aged 77–78, in Schio, Veneto, Italy. In 2000, she was declared a saint.

On the liturgical calendar of the Episcopal Church in the United States of America, Josephine Margaret Bakhita is honoured with a Lesser Feast, also on February 8. On November 30, 2007, Pope Benedict XVI presents her life story as an exemplary example of Christian hope. “All of Africa, rejoice!” he exclaims. “Bakhita has returned to you.” On November 30, 2007, Pope Benedict XVI narrated her life story as an excellent example of Christian hope in the introduction of his second encyclical letter Spe Salvi (“In Hope We Were Saved”).

Uloma Victoria
I am an Economics undergrad at the University of Lagos. I love to write because it allows me to free my thoughts and express my creativity. Experience the canvas of my life through the lines of art.
Share
Facebook
Twitter
Pinterest
WhatsApp