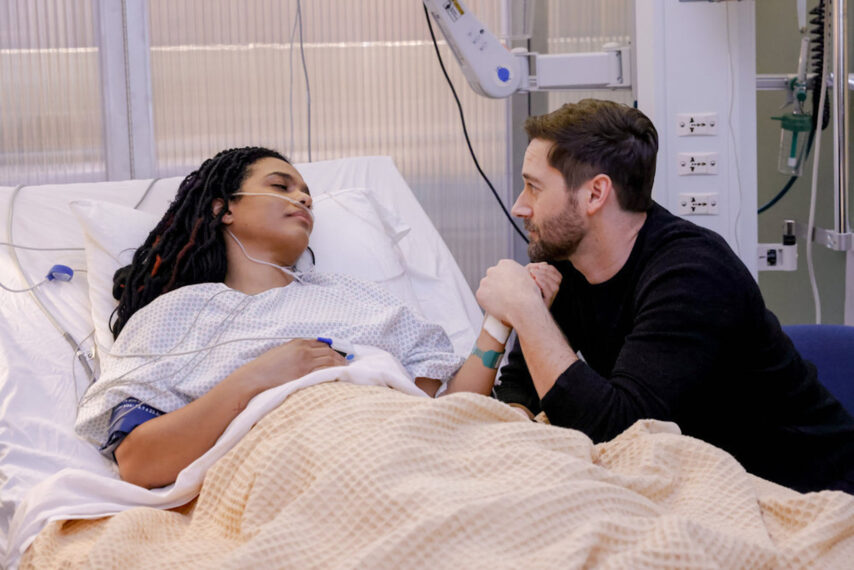 As the new season of New Amsterdam continues, fans are anxiously awaiting news about what will happen to Helen following her stroke in the latest episode. While Max has vowed to be there for her through thick and thin, it remains unclear whether or not she will ever regain the ability to speak or if their relationship can survive such a huge setback.

For any fans who thought that New Amsterdam would solve all of the cliffhanger tales from the spring premiere in one episode, “Unfinished Business” proved that there are lasting repercussions for a karaoke evening.

There happens to be good news and bad news. The good news is that everyone who vanished after being drugged at the karaoke bar — by the bartender (Adam Rose) who blames doctors for, as he sees it, overstating COVID and costing him his livelihood — is safe. Dr. Max Goodwin (Ryan Eggold) and Dr. Helen Sharpe (Freema Agyeman) are engaged. But as far as good news goes, that is all there is.

The bad news however is that Helen has suffered a stroke which is a major setback for her and Max, and there are many questions about what will happen next. Despite his promise to be by her side, it is unclear whether or not Max will be able to support Helen through this difficult time. Their relationship has already been strained by other issues, so it remains to be seen if they can really make it through this trial

Executive producers David Schulner and Peter Horton have confirmed what exactly happened to her and what may happen moving forward.

Helen “has had a major stroke,” according to David Schulner, right after everything was going so well, and it’s something she can’t just bounce back from. Per Cinema Blend, Peter Horton also said,

Unable to talk, unable to get her brain to form words. And the thing that’s so tragic about it is the future – suddenly out of nowhere, like you said, it was going so well with their future all before them with everything working out the way they planned on and worked for all of these years. And now suddenly, those plans are all out the window, because who knows what’s going to happen to her? Is she going to be able to ever get her speech back? And if she does, is it the same speech and therefore the same person that Max was going to marry? Because it changes. You know, when things like that happen, they tend to kind of change your identity. Your system naturally evolves to accommodate for it. So what’s that going to mean, if that happens for her? What does that mean for them? What does it mean for their love for each other?

Regardless of the outcome, fans will have to wait until next week’s episode to see just how Helen’s story continues. In the meantime, they’re left wondering if there is any hope for her recovery and what might happen with the love birds.

On Tuesday, May 3, tune in to NBC for the next new episode of New Amsterdam to see what happens following Helen’s stroke in Season 4.

Previous articleWhat Did Vijaya Gadde Say on Joe Rogan’s Podcast?
Next articleWhat Is the Meaning of Gratification Kink?