Busy! Who Should Cook Dinner? 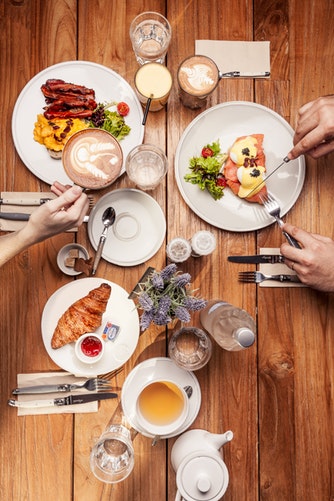 I was scrolling through Instagram on Sunday. Bored of the regular politics rants from Nigerian citizens who did not even have their Permanent Voters Cards in hand but were quick to complain about the elections on social media. Then I came across an AD on a female celebrity’s page for an Instant Noodle company. It was the most interesting and intriguing thing I have ever seen on Nigerian advertisement scene.

Let me give you a summary.

A lady tweets a picture of herself at the gym with the caption… BUSY#WhoShouldCookDinner?

Her significant other sees the tweet and tweets a picture of himself in the studio with the caption…you guessed it – BUSY #WhoShouldCookDinner?

They go back and forth with this caption throughout the day as they go about the individual businesses, until it’s the end of the day and the couple gets back home both exhausted.

They end up making dinner together.

The ad was different from the others I had seen that always portrayed the woman in the kitchen. Destined to always have the cooking role, no matter if she is a full time wife or if she has a professional career.

In this part of the world, it is very normal for the woman to have that role. Don’t get me wrong, you can cook for your family as often as you want. It does not make you less of a strong woman. Or less of a feminist.

The wrong part of it is when that role is pressured on her. Despite the other responsibilities she has to carry on her head. It is okay if you want to do all the cooking. But what isn’t okay is if a man feels entitled to cut short your job just so you can stay home and make breakfast, lunch and dinner. What’s not okay is if the man gets home before you and is furious that you are still at work and are not yet home to make him his dinner.

I, for one, am attracted to a man who can cook and not just that, but who sees it as nothing to get into the kitchen and throw it down as often as I do. It is a huge turn on.

The point of feminism is equality, and in the case of any couple, compromise. Respect the fact that I am a working woman that is trying to get ahead in her career and so can not make one different soup every single evening so that you can have “fresh soup” to eat. I like fresh soup too! You may as well make it for me.

At the end of the day, a couple will work according to their own choices but a woman should not have to feel terrible for working hard at her job and not being able to meet an egoistical or chauvinistic partner’s needs. This is why you have to ask certain questions and look out for certain behaviors during dating and courtship.

I loved the noodle advertisement as it reminded me a lot of the ad that Meghan Markle, Ducchess of Sussex complained about when she was just 11 years old. The dish washing liquid company that projected that only women should wash dishes promptly took down and restructured the ad to make it suit an equalist society.

This should be our aim in fact, to make sure every woman and man sees a woman as willing and capable to go after her tasks and not be suppressed by some of these things.

What’s wrong with a man coming home from work and making dinner before his wife gets home? Nothing! In our part of the world, however, we still have a long way to go and I do hope we get there someday. SOONER  rather than later!

Watch the ad below:

Hey guys @sharonooja x @iceprincezamani, these days, we know everybody is busy, but thankfully anybody can cook dinner with My Indomie My Recipe. 8 delicious yet convenient special recipes available on our Indomie Life TV youtube page to choose from. _____ And throughout this month of love, prepare any of the special dinners and you could WIN amazing daily prizes, weekly cash prizes, and a dinner date with Ice Prince and Sharon Ooja. _______ HOW TO ENTER FOR THE COMPETITION – Prepare your favourite meal from the My Indomie My Recipe Playlist on The indomie Life TV Youtube channel – Take a picture of the meal with your indomie pack by the side – Post the picture on social media with the hashtag #myindomiemyrecipe #myindomiemystyle – Get as many likes on your post – Selected entries will be reposted on the indomie page PRIZES TO BE WON – 100k and a dinner date with Ice-prince and Sharon Ooja – 1 winner gets 10k every week for the next four weeks – 2 cartons of indomie daily