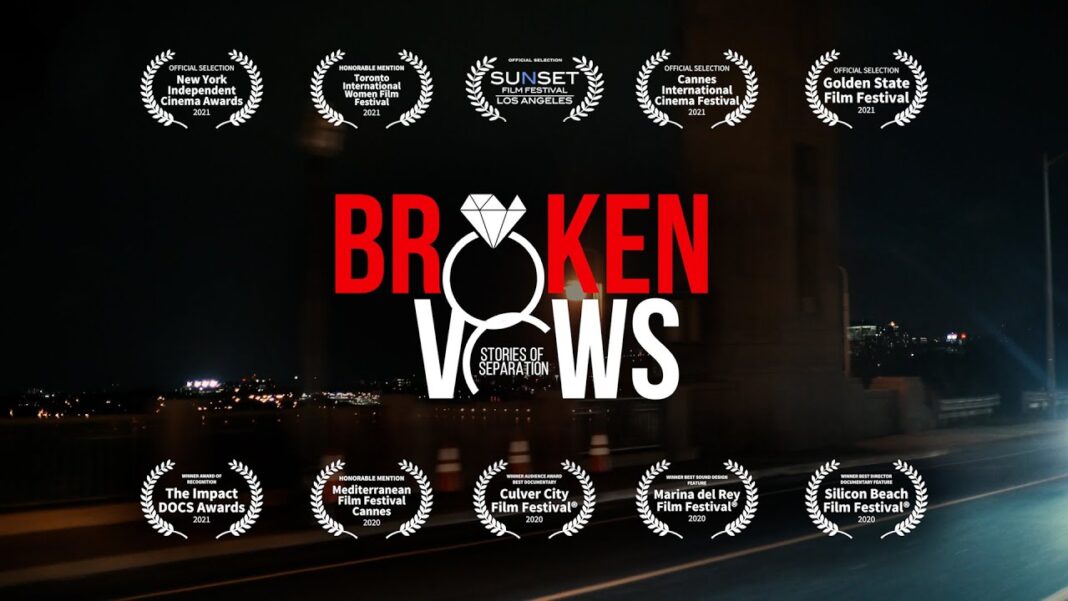 The multi-award-winning feature-length documentary BROKEN VOWS: Stories of Separation takes you into the lives of women, their personal stories, and tales of those caught in the crossfire of marriage breakdown and separation. Directed by award-winning director Sunnie McFadden-Curtis, it is a project from the filmmaker’s production company, bench boy productions inc.

BROKEN VOWS shows why separation can be one of the most psychologically exhausting times in a woman’s life. It explains there is often an expectation to make life-altering decisions under extreme duress and evolve rapidly in a world churning with mega-issues. BROKEN VOWS is about a universal theme with global appeal, yet it provides solace to individuals who need to know they are not alone anymore.

“I would like audiences of BROKEN VOWS: Stories of Separation to have a better understanding and perspective of the roller coaster ride separation can take you on and find solace in the notion that you can walk through the darkness to the light,” says McFadden-Curtis.

Black female director, filmmaker, producer, actor, and above all, a dedicated social advocate,  McFadden-Curtis fills BROKEN VOWS with diverse stories and the myriad of challenging realities, through firsthand, intimate testimonials, including her own.

Through sharing my own separation experience, and those of others, I hope to illuminate a dark subject rarely discussed openly,” explains McFadden-Curtis.

The pandemic has aggravated all these issues for couples considering separation, isolation, from family and friends, loss of income, economic instability, disruption of regular routines, and imposed quarantines–which can force these individuals to stay home together–percolating conditions for marital chaos, domestic violence, and separation.

Committed to providing hope, McFadden-Curtishas created a digital resource BROKEN VOWS: Stories of Separation “The Resource” to the documentary, which offers real resources she hopes will help women move forward upon separation.

The digital Resource will address the gnawing question: When a marriage ends, where do you begin? The resource can be purchased as individual volumes or in its entirety:  brokenvowsfilm.com

“My hope is that Broken Vows: Stories Of Separation, will create a dialogue of healing for its audience members. For those going through a separation themselves—moving through the darkness to the light–I hope they will share this documentary and TheResource as a conversation starter. I also hope they reach out for ‘help’ when they need it.”

McFadden-Curtis is a lifelong social advocate for women and children.  BROKEN VOWS follows the socially conscious producer’s previous projects: Bullying: A Culture of Silence, Cyber Bullying: Where Are We Going Wrong? & Shane r u there?  www.benchboyproduction.com.

The filmmaker and her son Brennon were honoured to be invited to the United States Senate to take part in roundtable discussions pertaining to ways to make schools safer through anti-bullying education.

As a keynote speaker, McFadden-Curtis has also spoken internationally on anti-bullying, providing screenings of her powerful documentary, Bullying: A Culture of Silence and presentations. More info about the change she has been involved in re anti-bullying education upon request.

BROKEN VOWS: The Resource will be available for purchase at: www.brokenvowsfilm.com