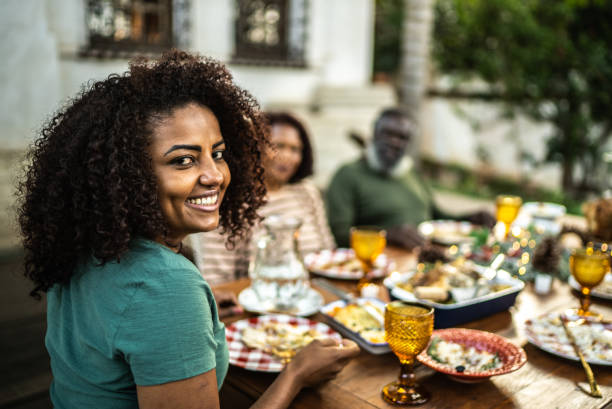 When you ask the average person world over what Christmas means to them, you can expect to hear answers like: “It is a time to relax”, “It is a period to see loved ones” and “It is a time to take stock of what I have achieved throughout the year”.

However these responses as valid and wholesome as they are, do not take into account the gendered experiences of women during Christmas.

For a lot of African women, Christmas is far from being a time to relax, because gender roles dictate that as wives and even as daughters, they are to do the bulk of care, hosting and taking care of visitors who come to their home.

Even when it is not the woman directly cooking, it is still up to her to ensure the smooth running of the home. It is not uncommon in Igbo families, for men to insist that their wives cook and clean up as a way to show his friends how much of a domesticated woman he has married.

Should she refuse or express discomfort, she would not only be verbally criticized by his family and friends, she would also face the possibility of domestic violence from him.

For instance, women who are unmarried may be told to do the bulk of cleaning up after the children even if they had other plans. Women who do not have children, who do not want children or have infertility issues would stand the risk of being insulted, mocked and disregarded because they aren’t yet mothers.

To further understand the experiences faced by women during Christmas I spoke to three women.

Speaking with Lynda, a writer, she explains that she dislikes Christmas because of how she is disturbed by family members due to being unmarried.

She said: “As the only daughter, I don’t look forward to family gatherings and, worse, Christmas. I like the idea of being with my siblings and parents, but I get to do all the kitchen work with my mum while the boys do nothing.

I haven’t gone to my dad’s village in two years because of the constant ‘When will you bring wine for us? We are thirsty’. It’s almost December, and I have told my mum I’m not going to the village with them for obvious reasons.”

She went on to say: “Also, I’m the first granddaughter in my mum’s house, and somehow I’m expected to clean up after everyone. Whenever I try to complain, they tell me it would be no different in my husband’s place.

So do I look forward to Christmas? Only because it’s one of the few times I get to hang with all my brothers in the same place. Every other thing irks me.”

For Elohor, a writer and tutor, festive seasons in and out of Christmas are a reminder of the burden of house chores that she had to bear as a young child.

She told me: “We don’t do Christmas at all. Never have. But we have a church programme that holds just before Christmas so the whole family gets in Warri at that time. I’m talking my mum’s eight siblings, all fifteen plus grandchildren and numerous relatives. My earliest memory is of being in the kitchen with my grandma. I could make amala at 9. Why? My grandpa only ate that swallow. I would wake up and cook, collecting orders like a sous chef. I wouldn’t shower until evening. That was my holiday growing up. I was called the helpful child. I would cook, clean and look after all my cousins.

Of course, I got resentful. I could never play with the other children because my grandma put me in charge of them.”

She went on to say: “One instance comes to mind. It was just after NYSC. I went home per usual and it was also December. I cooked and cleaned all day and did laundry. It wasn’t until I almost passed out that day that I was taken to the hospital and had surgery that night to take out my appendix. Why didn’t I know I was sick? I thought it was just a body ache from house chores. And when I was discharged from the hospital, people would come to visit and see me bent over washing clothes and they’d be like, “Nor be she do operation?” Well, no one offered to help me do what I had been doing for them all. I would be asleep and my grandma would be like, “You dey sick?” because God forbid I take a nap after feeding 12 people.

And without fail, I always fell sick in December because of this.

Last year, I travelled again and they wanted to come with that shit. I didn’t leave my room until I came back to Lagos. Know what happened? The whole family, Nigeria and abroad called and gossiped. How I’ve changed, how I’m no longer useful in the house, how I think I’m too big now.

I used to be so resentful of my big cousins. I am a Warri girl who’s never gone out by herself in Warri before.”

For women like Kosi, although Christmas has meant a time for reunions, it is also a season where gender roles emerge no matter how much her parents try to be equitable.

She said: “I’ve always loved Christmas. Still do. I noticed however, that as I grew older, I stopped being as enthusiastic as I used to be about travelling to the village. Mainly because we’d have to clean the house after not being in it the whole year, and also because I no longer want to meet so many people.

In terms of chores, my family is pretty equitable, so we share chores amongst my siblings and cousins, irrespective of gender. The only thing that my sister and I have to do is cook, and my sister does most of the cooking in the village.”

Speaking with these three women has reinforced an uncomfortable and often ignored truth. It is the truth that women’s lives hardly have any care and rest even from those touted to “take care of women”.

If gender roles and the expectations of unequal cooking aren’t dismantled, even in festive seasons women and girls would not enjoy the essence of the holiday period.