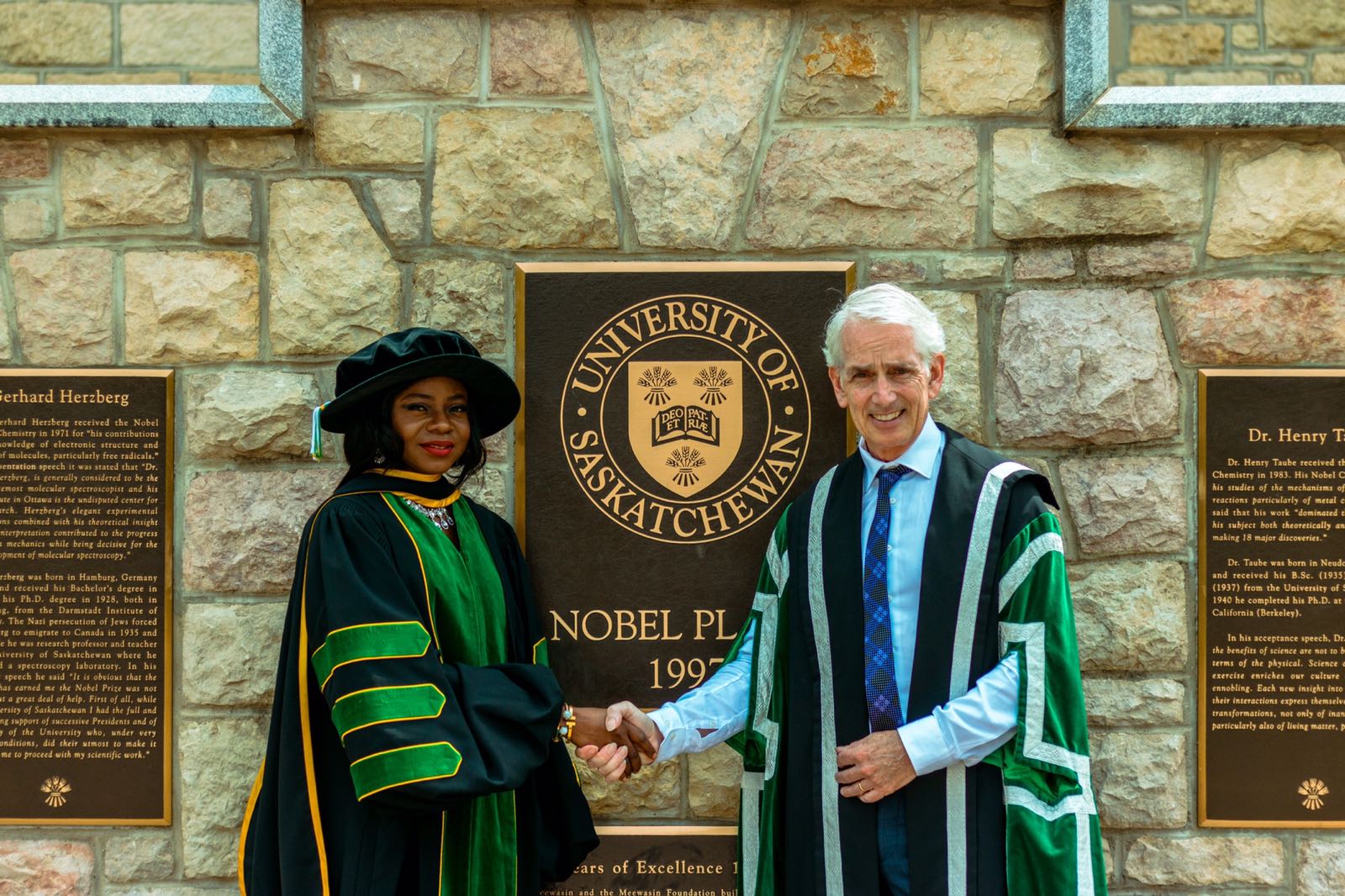 “Asides being a child hawker and having two parents who had no education, life made me ‘THE LAST'”. Dr Adeola Olubamiji starts, “I am the 5th of five children, the extra child that wasn’t really wanted but came. Growing up, I was quite unpopular, and I was often referred to as someone’s younger sister or someone’s child”.

Dr Adeola who hawked pepper on the streets of Ibadan, at the age of 10, is the 1st black person to bag a PH.D in Biomedical Engineering from the University of Saskatchewan, Canada.

” I didn’t chose to come last but being last in a home with very little funding is not being the princess like most last children” she continues.

Dr Adeola Olubamiji is the Lead Metallurgist / Material Engineer at Burloak Technologies (The Advanced Additive Manufacturing Division of Samuel Sons & Co) in Ontario, Canada. In addition, she is an entrepreneur and owns a Consulting Company, D-Tech Centrix, located in Hamilton, Ontario, Canada. She has also recently started an initiative called STEM-ing, an initiative that showcases and teaches challenging Science Technology Engineering and Mathematics (STEM) concepts through hands-on and fun-filled experimental activities and organizes industrial tours for black youths in the Ontario’s black communities. This is to help black youths discover what engineers do, and to expose them to STEM career opportunities available to them and encourage them to choose such careers. 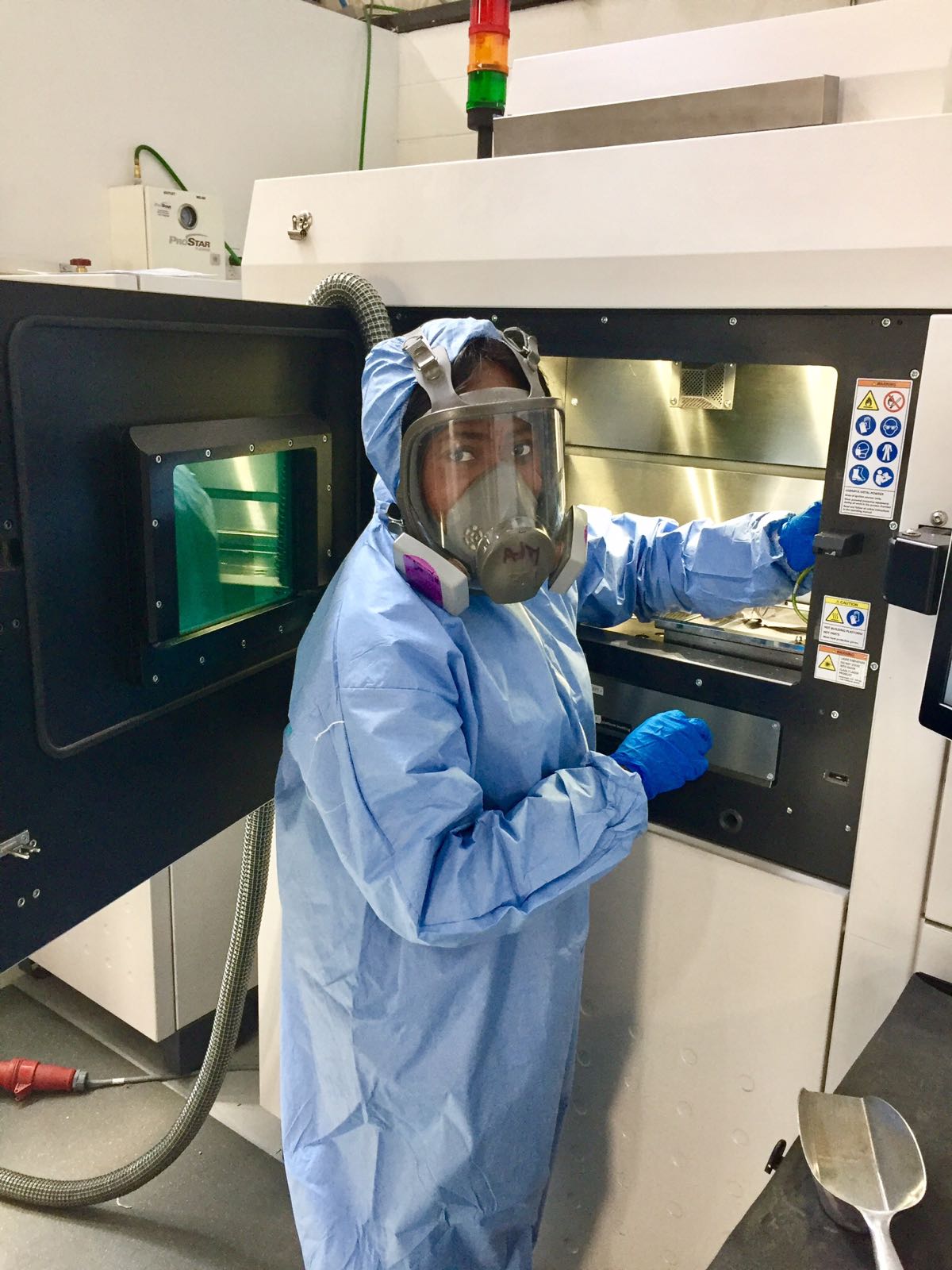 Unlike most people born into similar situations, she chose not to allow her surroundings dictate the level of her pursuit for success. “I looked outward and I couldn’t find a role model on our streets. Success stories from my neighborhood were deeply rooted in Illegal immigration, Prostitution, ‘419’ and those stories didn’t represent my future”. She looked inward and according to her, on the wall of the living room in which her family lived, were men who she could model her life after. “I found a photograph of Professor of Nuclear Physics who happened to be my uncle on the wall of our living room. Although he was born in Ijare to parents like mine or worse, education was my uncle’s weapon that he used to defeat poverty”. And so, it became clear to her that to EARN MORE, SHE HAD TO LEARN MORE.
“I modeled my life after my uncle, Professor Francis Abiodun Oluwole, and obtained my BSc in Physics/ Electronics. From late night studies with “ATUPA” naked light after hawking, to borrowing Okeke and Ababio and other textbooks as we couldn’t afford to pay for one”. She continues.

Dr Adeola says that the facts were real, they were poor, her parents had no education, they lived in the ghetto, a number of them shared one room and of course, she didn’t have a bed to herself. “I got sent back home from school on several occasions for not paying tuition on time, I was a child hawker and I was the extra and not that wanted child. Clearly, it looked like I wouldn’t amount to much, but I wanted to change that”.
How then did she begin her journey to changing her family status? She says, ” It occurred to me that if I wanted to live the life I had never lived, I had to do the things I had never done”. She goes on to say that she also critically held on to the fact that she was a victim of the rules she lived by.

Why did she choose to study Physics? She answers, “Physics is basically the most fundamental of all sciences and engineering principles. The basic principles of magnetism, themodynamics, forces, energy, motion and so on, are based on physics. Therefore, with physics, it is easy to diversify or transition to engineering, data analysis and so on. Several novel ideas were born out of physics. The more I knew in Physics, the more I knew that I didn’t know. It challenged me and I loved and still love it”.

Being a female in a largely male dominated profession, there has to be a lot of competition. On how she copes with this, she says, “I was raised alongside 3 men who happened to be my first mentors. Therefore, I was a “Tom boy” and competition was a way of life. How you see this issue is up to you, half full or half empty. For instance, Sexism and Racism is real but you can decide to use this to your advantage. Being a visible minority (female, black and young) is one of my many advantages in life, especially in engineering. As a black female, if you know your onions, you will stand out and you will thrive.This is the way I see it because the cup to me is half full”.

Speaking about the illegal immigration of youths in search of greener pastures, Dr Adeola quotes Meghan Markle saying that reflecting on where she came from helps her appreciate where she is now. “Growing up in Mokola, Libya was where most of Mokola’s youths faced for greener pastures. I can not deny it, Libya made a way for a lot of my big brothers from Mokola to get to Europe. The same way I left home in search for greener pastures, they did the same, the way they know”. She goes on to say, “Who you look up to will determine how far you will go in life. These days a lot of Nigerian youths indirectly pick celebrities as their role models. This has resulted into many of our youths aspiring to be musicians, beauticians, party planners, and slay queens. The same way I chose to look up to a Professor of Physics and turned out to be a Physicist, this is what is happening everywhere in Nigeria including in Mokola. Give a child a role model and you can predict his or her future”.

She however has a word for the Nigerian Youths. ” A lizard in Nigeria cannot be an alligator anywhere else. Use the Nigerian population to your advantage and use the resources around you. Be careful what you consume on social media as the indirect role models on social media who are living lavish lives do not represent the reality. Live in your truth and ignore the background noise. The grass is never greener on the other side. Its not easy for anyone abroad too. I was a cleaner for 4.5 years in Europe and I was a sales girl for 3 years in Canada. All that glitters is not gold and behind a lot of the pictures you see on social media are hustle stories, face your own hustle. Define who you are, why you are who you are. Define who you are and where you are going. My go to quote is “if you don’t stand for something, you will stand for everything or anything, and when you stand for everything or anything, you stand for nothing”. Do not follow the noise and the crowd, know who you are, stand by that idea and work hard on it. You will be amazed when it all starts materializing. Information is power. Please do not wait for anyone to do the things you can do for yourself for you. Lastly, its okay to be different and it is okay to be a trial-blazer. I became the first black person to obtain a PhD in Biomedical Engineering from that Canadian University because I wasn’t afraid to be different. Your difference will stand you out and it will make a way for you. Ignore the background noise and dare to win”.