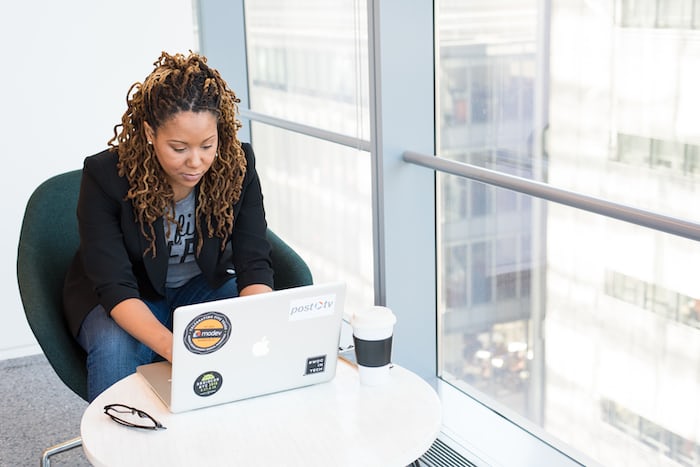 When I was an English undergraduate in Babcock University, one of my favourite feminist pages on Instagram that I used to destress, was Feminist Matters. It was run by Instagram user @urichindu and helped me navigate living as a young feminist in Nigeria.

What I do remember feeling though, was a sense of worry and dread that her livelihood could be denied her because her boss hated women who were feminist. I also remember thinking if I was going to be in the same shoes as her.

However, I do remember working in places where there were sexist men in the organisation and actually getting into arguments with them on things like abortion and women’s rights.

Knowing what I know now almost three years later, I would not have engaged any of these men in an argument or a conversation.

For the simple fact that my fate could have become that of the woman mentioned earlier in the Feminist Matters page.

This is not to victim blame her or say that she brought nonsense upon herself as a feminist in the workplace.

This is rather to offer tips to young women who want to build their careers especially in the corporate workspace in a country like Nigeria where sexism heavily permeates even formal places like workplaces.

The first thing I have come to do as a feminist, is that I do not engage my colleagues in arguments about gender. I focus my energy on the reason I am at work which is well…to work.

I also do not engage my male colleagues not necessarily because they are my colleagues, but also because outside of the office and social media, I have a belief that arguing with a Nigerian man on my life experiences is like asking him for permission to accept that the things which happened to me are indeed true.

In addition, I believe that my time is of utmost importance to me and so, I would not spend it arguing with someone who can give me hypertension, is set in his ways and just wants to tick winning an argument with a feminist in his box of daily achievements.

Speaking with T*, a poet and content writer, she tells me that though she is in between jobs, her modus operandi in the workplace is to choose ‘laziness’. In her words: “I’m between jobs. But in my last job, I worked with mostly men.

My major principle was to choose laziness. Asides my work, I was intentional about not volunteering for certain things. Not volunteering to cut cake during birthdays or try to help plan things like food, drinks etc.

I also didn’t speak to men outside of work and my only work friend was a babe 😂. So it cut unnecessary conversations drastically.”

She went further to say: “Sometimes, they send sexist stuff to the work group chat, and I’ll just ignore. It’s not my job to teach grown men about rights or their privilege.

I was also very intentional about building a solid relationship with at least one woman there and I was able to do that. We would have honest conversations about salaries, career advancement and generally looked out for each other.”

A woman who preferred to be anonymous echoed the thoughts of T when she said that she doesn’t engage in “unsolicited kindness”.

To quote her: “Do not do the extra work and don’t engage in the ‘unsolicited kindness’. Most of them want to fuck and if you reject them they make your work hard.

I navigate by keeping my conversations with people to an all time low.”

She went on to advise: “Have one female friend you can trust. Try to ignore and keep a very very low head because men at work never act from a good place.

It’s not so much as a feminist take but just understanding how to survive corporate work as a woman.”

Remote work has often been touted as offering some women respite from the burdens of onsite jobs.

That has been the case with Temidayo who explains that she didn’t have the option of reporting to Human Resources because it was men in the HR department harassing her.

In her words: “Thankfully I now work in a remote setting, but my experience when I worked with a Nigerian paramilitary organisation wasn’t so pleasant.

I almost became an educator that people (men) started to see me as a pain in the ass. I worked in the HR department 😂 and na the ogas dey hit on me, who shall I run to?

I had to apply wisdom, seek for advice from older women who have worked in such setting (they had no good testimony about this category of men), and wade through one day at a time.”

She went on to say: “I later became rugged because these men don’t hear word, I started embarrassing them publicly with utmost disrespect.

Male coworkers were my only problem that period, the female coworkers often minded their business and paid for my stuffs if we met at a supermarket. Yup, I felt more comfortable accepting help from my female bosses, they never asked for my address or if I was seeing someone… Very sensible humans. The boundary was unspoken but respected by most women, but you see the  greater percentage of those men?😤”.

She ended by saying: “As a feminist, just like in most spaces, when you point things out as abnormal, na you them go tag as abnormal but I’m comfortable and cool with that. Although I have a bubbly personality that made it hard not to like me that time, maybe I didn’t notice the dislikes.😁”.

For some women, being loud about feminism has been what guarantees that they are not disrespected. That hasn’t been truer than in the case of Olakitan, who works in the tech industry.

In her words: “I have a story about this.

One time, I worked for a company where virtually everybody was sexist and misogynist and generally disregarded boundaries.

One day, some male colleagues did something inappropriate, they saw a female colleague’s dressing and started to whistle and snigger. I called them out on it and they got angry and one even threatened to beat me the next day. I reported to HR and HR told me to apologise, that I shouldn’t have called them out that way.

I refused and told them they would hear from my lawyers. Anyways, the case died down eventually.”

She concluded by saying: To answer your question, Angel, I navigate being a feminist at work based on the situation. When I was at an openly misogynist office, I wore it like a badge so nobody will try me or try nonsense around me. When I moved to a less misogynist company, not so much because it didn’t matter, HR had put policies in place and everyone generally behaved themselves.”

For Lola, a resident in the United States, she explains that being confident has helped her greatly navigate the workplace as a feminist.

To quote her: “I do so by being as confident as I can be, knowing that I have the right and audacity to be present in the room as much as they do. I speak up and don’t engage in conversations that make me uncomfortable.”

From the responses I received, two things stick out. They are the role of the feminist woman in choosing not to engage in tasks like cutting cake and sharing tea so as not to be taking for granted. Essentially, she must set boundaries and be focused on her work.

The second important thing is the role of the office and the law in a country in setting policies that protect women from sexual harassment. If these two things are well managed it will be easier for women to navigate the workplace as feminists.